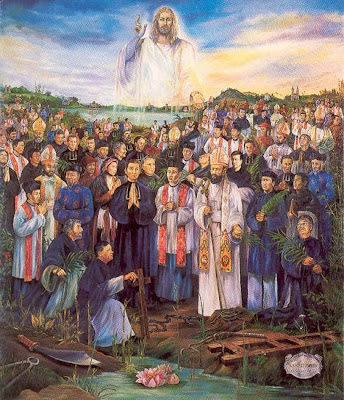 St. Joseph Marchand was a French priest, sent as a missionary to Vietnam in 1830, the year St. Catherine Labouré received the Miraculous Medal. Although he was offered the headship of the Foreign Missionary Seminary in Paris in 1832, he chose instead to remain in Vietnam.

Which turned out to be a fateful decision for the young priest. The following year, he was arrested pursuant to a royal decree against all European missionaries. He languished in prison in Saigon for 18 months, after which he died a horrible death, being torn apart by red-hot tongs. He was beatified in 1900, and canonized by Pope John Paul II in 1988.
Here is a link to the Litany of the Martyrs of Vietnam, including St. Joseph Marchand. This Litany was composed by my good friend Mike Turner, OPL, and was approved for publication by our bishop in 2007.
Posted by Anita Moore at 00:00