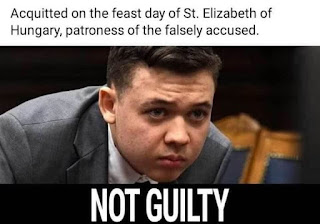 It is joy to the just to do judgment: and dread to them that work iniquity.  Proverbs. 21:15

Thank God Kyle Rittenhouse was acquitted.  I was getting worried there for a while as the jury's deliberations dragged on.  Lengthy deliberations are not necessarily a good sign.  Lengthy deliberations can mean the jury is talking itself out of reasonable doubt.  But, in this case, it all worked out.  The jury reached exactly the right result, even in the face of political pressure and apparent intimidation tactics.  Not only Kyle Rittenhouse, but the entire right of self-defense, and the right to keep and bear arms, is vindicated.  This is critical in a world where government entities are increasingly turning against their own citizens, both by interfering directly with their lives and their rights, and by allowing others to do so with impunity, like what happened last year in Kenosha.

As a criminal defense attorney, I can honestly say that a case of self-defense doesn't get any cleaner than this one.  Rittenhouse pretty obviously used only that force that was absolutely necessary, only when it became absolutely necessary, and only against those who actually threatened him with deadly force.  In short, he did everything right all the way down the line.  In fact, he went above and beyond by trying to retreat, in a state where he had no legal duty to retreat.  I would love for a case of mine to have facts like Rittenhouse had in his -- except, of course, that, as long as there are honest prosecutors, I will never have such a case, because honest prosecutors would not move on it.

Even for those who attempt to shift the focus onto issues not relevant to self-defense, there is no peg in this case on which to hang their hats.  The "white supremacist" angle is a non-starter: all the people Rittenhouse shot in self-defense were white, and there is no evidence that he is a "white supremacist."  The suggestion that Rittenhouse traveled "across state lines" for the purpose of insinuating himself into something that didn't concern him is a non-starter: Rittenhouse had substantial and significant ties to Kenosha and only lived about 20 miles away.  The suggestion that Rittenhouse was a hot-dog gun-slinger looking to mix it up with political opponents and make himself feel important is unsupported by the facts, especially his obvious and video-taped self-restraint; in fact, his repeated attempts to flee to the police proves that he made every effort not to shoot people.    Not one of these issues has anything to do with whether or not Rittenhouse was threatened with death or great bodily harm, and if so, whether his response was proportionate to the threat.

As far as the preposterous gun charge goes -- the one the judge threw out before the case went to the jury -- the legality of Rittenhouse's rifle is a matter of simple mathematics.  The Wisconsin statute that makes it a misdemeanor for a minor to carry a deadly weapon applies in the case of short-barreled rifles, defined as having a barrel less than 16 inches long or an overall length of less than 26 inches (Wisc. Stat. §§ 941.28, 948.60).  The prosecution had to admit to the court that Rittenhouse's rifle did not meet the definition of a short-barreled rifle.  Why, then, was this obviously inapplicable charge thrown into the mix?  I cannot read the minds of the prosecutors.  But such a charge makes sense as a rallying point for yet another irrelevant controversy, namely, the question of what a seventeen-year-old kid was doing on the scene in the first place -- a question that never got asked about the people burning down Kenosha, some of whom apparently had farther to travel to get there than Rittenhouse did.

The state's whole case against Kyle Rittenhouse seems to be based on the premise that a claim of self-defense is legitimate only in a situation where you wait until it is too late to actually defend yourself, or where you are not defending yourself against woke criminals.  It illustrates the perversity of a system that (a) allows rioters to destroy a city with impunity; and then, having created this deadly state of affairs, (b) sets its sights on a person who clearly exercises his legitimate right of self-defense against these rioters, and (c) and props the rest of us up to sympathize with the rioters who unjustly attacked him.  Justice prevailed today for Kyle Rittenhouse.

But there is still more that needs to be done.  The surviving attackers of Rittenhouse, as well as all the other arsonists and looters that took away the peace of Kenosha and the livelihoods of innocent people, ought to stand trial, as Rittenhouse should not have had to do.  All the government officials who let all this happen should be out of a job and never allowed to hold public office again.  And all the media types and liberal politicians who spent the last year defaming Kyle Rittenhouse should be sued into bankruptcy.

In short, it is the destroyers of society who should be made to live in fear, not the honest citizens like Kyle Rittenhouse.

When the Guns Fell Silent

This remarkable recording is not an actual sound recording of the end of World War I, but a modern interpretation of actual data collected during the last minutes of the war using a technique called "sound ranging."  Sound ranging was a crude sort of direction-finding technology used to triangulate the location of enemy artillery by producing a visual record of sound intensity on photographic film.  Someone operating one of these sound ranging systems thought to make a record of the cease-fire and preserve it for posterity.  Today this piece of film is in the custody of the British Imperial War Museum.  In 2018, to commemorate the hundredth anniversary of the Armistice, the Museum commissioned a sound production company to make a recording based on the data on the film. In Flanders fields.
Posted by Anita Moore at 00:00 No comments:

Ann Barnhardt, whom I have criticized in this space for her crusade against Pope Francis as the true Pope, has made a really good point about masking: if masking really protects people from disease, why no masks around AIDS patients?  Today we are being told that we must mask up to protect Grandma and her compromised immune system (by the same liberals who think that same Grandma should have a "right" to be euthanized). Yet during the height of the AIDS crisis, we were never taught to mask up to protect AIDS patients who, as Ann points out, basically had no immune system at all and were apt to die of infections from microbes that people carry around on themselves harmlessly as a matter of course.  It pays to reflect on these two crises, AIDS and the coronavirus, and how their different tactics reveal the same underlying long-term objectives.

I was in early adolescence about the time AIDS first appeared on the scene forty years ago, and it was much on everyone's minds during my high school and college years.  Seeing the pictures of Princess Diana holding hands with emaciated AIDS patients brings back memories of the fact that at that time, not only were there no face muzzles around these patients, but we were all encouraged to touch them, shake their hands, get into close physical proximity, so that they wouldn't feel like lepers (and also, incidentally, to signal our own high virtue).  I don't remember ever hearing a syllable about transmitting diseases to people suffering from the lack of an immune system; back then, if anybody had suggested masking, it probably would have been laughed off by Anthony Fauci -- who was around at the time, pushing AZT -- just as he laughed it off at the beginning of the present crisis before deciding we need to wear TWO masks.  Looking back, protecting the well-being of AIDS patients or potential AIDS patients cannot have really been the point anyway.  The soothing reassurances came alongside threats, particularly in the attempt to convince the public that persons not engaged in particular risky behaviors were just as likely to catch it as those who were.  There was never any talk about discouraging the risky behaviors, as there should have been if there was really a serious desire to save lives; instead, the focus was on making the risky behaviors somehow less risky so that people could go on engaging in them without fear, and on discrediting those who believed AIDS was a divine retribution for the risky behaviors.  Both the bromides and the fear-mongering were aimed at the same objective: not the promotion of health, but to fend off the stigmas that would otherwise attach to either the risky behaviors or their practitioners.  For people who like to run other people's lives, there is no benefit to having the Great Unwashed be freed from slavery to sin.

The tactics of today's crisis propagandists have changed, but, like the propagandists of yesteryear, their strategic objective also has nothing to do with promoting health.  Now the idea is precisely to stigmatize both the risky behavior and those who practice it, with "risky behavior" being re-defined to mean living your life, going about your daily business and being sociable.  Now we need to treat each other as plague carriers, stay home, avoid human contact, live in fear, dry up the milk of human kindness, submit to an experimental vaccine on pain of losing our jobs, crash the economy, jump through all sorts of illegitimate hoops to manage our private affairs, and even stifle our oxygen intake and surrender our unique identities and personalities in the name of "saving lives" against a disease with a survival rate of nearly 100%.  Today's intended leper class is not AIDS patients, but people who won't take the shots whose inefficacy is at once publicly admitted and downplayed. As depression, suicide, domestic violence, child abuse, addiction and financial ruin mount, together with the erosion of our traditional rights and freedoms, it becomes clearer and clearer that the "solutions" to the corona problem are worse than the problem itself.  For people who like to run other people's lives, there is no benefit to having the Great Unwashed be free to live their lives and fulfill the purposes for which they were made without interference.  If it is not the goal of our ruling classes to destroy society in the name of "building back better," it is hard to imagine what they would do differently if it were.

Underneath both the AIDS crisis and the coronapanic is a sinister agenda, on the altar of which the real lives of flesh-and-blood human beings must be sacrificed, whether by keeping them enslaved to their vices or by choking off their ability to engage in their legitimate and lawful pursuits.  Ultimately the agenda is pure destruction and ruination.  The people who serve this agenda are, at best, either grossly incompetent or completely deluded as to the abyss from whence this agenda came.