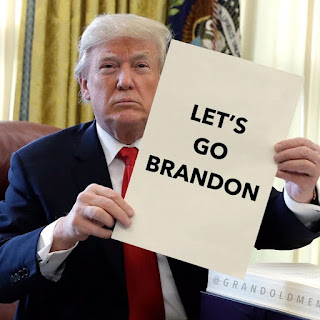 I really do sympathize with the sentiment behind the outpouring of a particular anti-Joe-Biden expletive slogan at rallies and sporting events.  And I cannot truthfully declare myself innocent of having ever uttered that particular expletive myself.

But: this is one time I am really glad we have come up with a euphemism for an expression of strongly-felt indignation.  Nearly 11 years ago, I gave my opinion in this space about the advisability of drafting vulgarity as a servant of the common good, and I haven't changed my thinking on this.  It is the liberals who set out to destroy manners and decorum, and we shouldn't be helping them with that.  I understand how the people feel who fly "F*** Joe Biden" flags from their houses or their pickups, but I really don't think we make the world a better place by making public obscenity ever more acceptable.  It's precisely in this way that we coarsen our sensibilities even more, until, before we know it, we won't be able to pick up on even the grossest evils.

"Let's Go Brandon," on the other hand, not only captures the sentiment behind the nasty flags and T-shirts without actually being nasty; it also has the secondary advantage of accurately targeting the media types who are trying to cover up the very real and mounting ire in the country over what Biden and his handlers are doing to us.  It is therefore even better than the original.

And it's a chorus I can join.  Let's go Brandon!

Because unlike in the '70s, the Boomer Generation has now completely squandered its moral capital.
Posted by Anita Moore at 06:30 5 comments:

I for one was electrified by this.
There are those who decried this as a setup and a stunt, especially after it came out that Taylor Marshall was behind it.  It would certainly have qualified as a setup and a stunt if Taylor Marshall had also been the one to bring idols into churches in the first place, thus playing both the arsonist and the fire department; but the case for that obviously cannot be made.  No, the responsibility for creating this whole situation unquestionably lies with the organizers of the Amazon Synod, and ultimately with the Pope, who publicly approved of it.  Pushback was essential, even if every blogger, podcaster and "professional Catholic" on earth was behind it.
What Alexander Tschugguel and his friend did, with Taylor Marshall's financial backing, somebody had to do.  Let those who criticize the event because it wasn't carried out by the right sort of people ask themselves whether they would have done it, if given the chance.  Somebody had to pull those idols out of that church, even if they couldn't get them all: Tschugguel said taking out all of the pagan crap would have needed a truck (and they had to keep a low profile and move fast, since they were, after all, doing something "illegal").  Somebody had to videotape it, so that it could not be chalked up to mere "theft."  Somebody had to galvanize the faithful Catholics, sunk in gloom at the spectacle of idolatrous rites in the heart of Christendom on earth.  Somebody had to splash cold water over the modernists in the hierarchy who, in their towering arrogance, probably never foresaw any pushback from the faithful Catholics.    Above all, somebody had to vindicate the honor of God, which was being outraged by His own prelates.
And there are probably other, hidden reasons why it had to be done.  I'm prepared to bet that the fate of these particular idols probably made a lot of liberal priests around the world think twice about putting them up in their own churches, lest equally dramatic results ensue.  Also, this small act of reparation may well have mitigated the worldwide punishment we have been suffering under since the Amazon Synod, and of which I have no doubt that the Synod was the proximate cause.
In short, the tossing of these totems into the Tiber made the world a better place, and probably in more ways than we can see with our mortal sight, this side of the General Judgment.  God bless everyone involved, and may something similar happen to derail this year's synodal circus.
Posted by Anita Moore at 14:20 No comments: 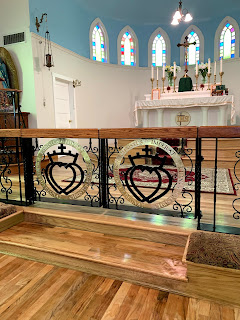 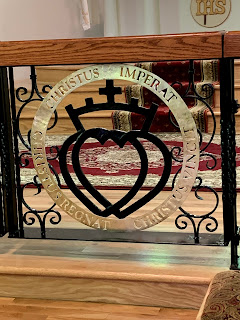 Looking at this new little bit of Catholic triumphalism on the sanctuary gates at the chapel makes me feel pretty good.  It instantly reminded me, the first time I saw it, of the Catholics of Port Marly, France on Palm Sunday, 1987, taking back their church with crowbars and a battering ram to the strains of "Christus Vincit."  Their bishop had bricked up their church because they insisted on the traditional Mass.  In a fit of what today would be called "disobedience," "schism" and maybe even "terrorism," but what tomorrow will be called true, manly devotion, the parishioners and their priest held Mass on the front steps, pried open the doors, and then took out the brick wall behind the doors.
It is good to be reminded every Sunday by the new sanctuary gate ornamentation that even though the world is going to hell in a bucket, and the Church has entirely fallen into the hands of her enemies, the reign of Christ is not just for the future, but is a present reality, right here, right now.  Christ conquers right now; He reigns right now; He rules right now, no matter what things look like to us.  Nothing is happening even now that He does not permit for the sake of a greater good, and that He cannot stop dead in its tracks in His own good time, which is probably not the same as our own good time.
All we have to do is persevere.  And keep our crowbars and battering rams handy.
Posted by Anita Moore at 18:59 4 comments: