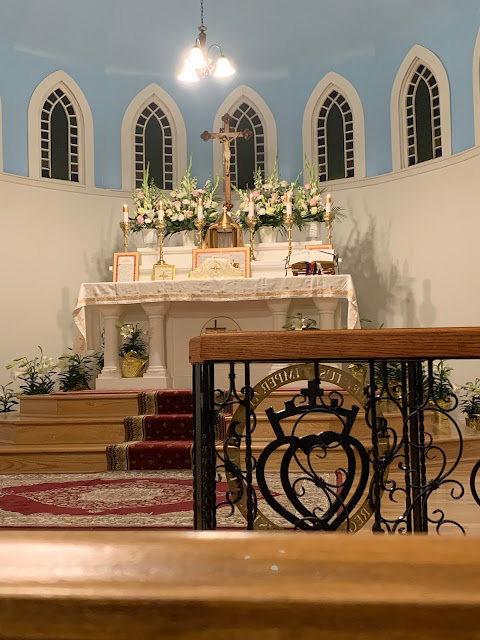 The vigil is over, Easter has arrived, the altar is ready for Mass, and the tabernacle is ready to receive the Eucharistic Lord.
Posted by Anita Moore at 10:02 No comments:

The Desolation of the Church 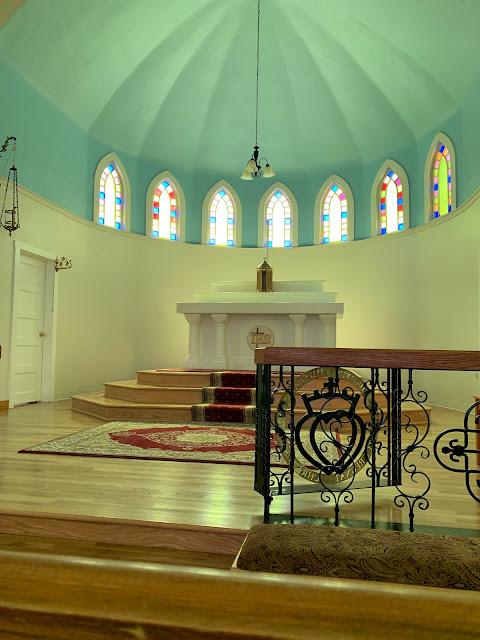 The desolation of the stripped altar strikes me forcefully this year.  This is exactly where the Church is at right now.  The Holy Thursday stripping of the altar is surely prophetic, since eventually we reached a point where altars would come pre-stripped and pre-desolated, to match the stripped and desolated new rites of Mass and the Sacraments that were to be foisted on us.
The deliberate desolating of Catholic churches, which started even before Vatican II and the Novus Ordo Missae, must in turn be prophetic of an even greater desolation that we are now living in: the desolation of true shepherds in the Church, the suspension of the magisterium, and the appalling spectacle of so many in the hierarchy, all the way to the very top, filling their valuable time with utter irrelevancies, and even openly and actively working for the other side.  Even on the morrow of the consecration of Russia, this is going on very notoriously in Germany, where bishops appear to have formally rejected the Church's doctrines on sexual morality.
Does this prove that the collegial consecration of Russia did not in fact take place?  I don't know.  I am on record rejecting the theory that Francis Bergoglio is not the true Pope, and saying that I think the consecration has now been performed as asked, even with its accretions of fol-de-rol, but I have also never ruled out the possibility that I am wrong.  Some critics of the Francis consecration cite to Sr. Lucia's account of our Lord's explanation that the consecration had to be done by the Pope in union with all the bishops so that there could be no mistaking the effects as being attributable to His mother's Immaculate Heart, and point to the fact that so far, it seems like nothing has happened.  Must a dramatic reversal of the devil's fortunes in the world follow instantaneously on the heels of the consecration in order for it to be legit?  Maybe.  That would seem to be the most obvious way of establishing cause and effect.  But I don't know that that is the only way.  I do know that in my own experience, whenever God has granted my prayers for a huge, life-changing grace, a period of penance -- mitigated in both length and severity, yet still producing real suffering -- has always preceded the moment in which the grace is actually given.  Maybe, at this late date, when the errors of Russia have not only spread throughout the world but gained ascendency, we are going to have a similar period of penance before the graces are actually given.  It's not like we don't deserve that, and much more.
Now we come back to the liturgical desolation in which Lent culminates.  What we seem to forget is that, unlike the devil, whose infernal headquarters is probably designed and furnished in the same brutalist style as that pictured above, our mother the Church does not intend this desolation to be permanent.  Permanent desolation, in which we have entrenched ourselves for decades in the name of bringing the Church into step with the Modern World, brings on despair, and despair leads to hell.  The desolation of Good Friday and Holy Saturday is mitigated in both duration and severity.  The altar is bare and the tabernacle empty, but they are not destroyed, leaving us with good hope for their restoration.  And this very short, hopeful desolation leads to the Resurrection and eternal life.
Posted by Anita Moore at 12:50 2 comments:

The Supreme Court: A Refutation of "We the People"

For behold the sovereign the Lord of Hosts shall take away from Jerusalem, and from Juda the valiant and the strong, the whole strength of bread, and the whole strength of water.  The strong man, and the man of war, the judge, and the prophet, and the cunning man, and the ancient.  The captain over fifty, and the honorable in countenance, and the counsellor, and the architect, and the skillful in eloquent speech.  And I will give children to be their princes, and the effeminate shall rule over them.  And the people shall rush one upon another, and every man against his neighbor: the child shall make it tumult against the ancient, and the base against the honorable.  For a man shall take hold on his brother, one of the house of his father, saying: Thou hast a garment, be thou our ruler, and let this ruin be under thy hand.  Isaiah 3:1-6

I don't know much more about the new Justice than her infamous answer to the obvious question of what "woman" means, and I don't need to know.  You don't have to drink the entire gallon of milk to find out if it's sour.  That someone so utterly void of common sense could be taken seriously as a candidate for any judgeship proves how far we as a nation have fallen.

We should also not lose sight of the fact that the importance of this appointment to the High Court proves what a failure our system is, and how not in charge of our own affairs we really are.  If We the People really ran the show, we would not need to be so obsessed with who is on the Supreme Court.  We cannot possibly be as free as we flatter ourselves that we are in a world where, every time the Supreme Court is in session, we sit on the edge of our seats, biting our nails, wondering what new 16-ton weights the court is going to drop on us from on high.  As the eyes of servants are on the hands of their masters, so are our eyes unto the U.S. Supreme Court, til it have mercy on us.  What a great deal we got when we got rid of King George III!

And what a great deal we got when we decided we did not need the social Kingship of Christ.  How free we are!  What an awesome rulership we have!

The worst punishment God can impose on us is to let us have our own way. 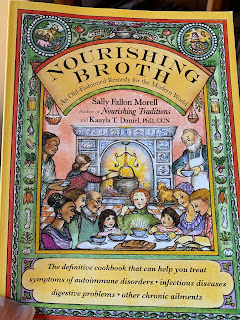 It was only three or four years ago that I never saw myself making bone broth.  The whole idea seemed rather disgusting.  But Nourishing Traditions led to my first batch of beef bone broth, with some rather amazing results.  So then I had to (a) get Sally Fallon's book Nourishing Broth, which goes more in-depth into bone broth, its properties and its benefits, and (b) expand the role of bone broth in my daily life.
To make bone broth, you need -- bones, among other things.  You can -- and should -- save up your leftover bones in the freezer, but if you live alone, you are going to take a long time to save up enough for the stockpot.  The greatest effort you will expend in making bone broth is in finding the ingredients.  Because supermarket butcher counters tend to get their meats and fish pre-filleted, they don't have the throwaway parts of animals.  But the throwaway parts are packed with nutrients, and broth-making is how we extract these.  Fortunately for me, one of my local grocery stores puts out knuckle bones, split cow hoofs, chicken feet, marrow bones and other such items on an as-available basis.  The day I first went looking for things to make stock out of, they had split cow hoofs, so I picked up a couple of these, plus a couple of pieces of ox tail.
Since the ox-tail pieces had some meat on them, I first browned those by roasting them in the oven.  Meanwhile, the cow hoofs soaked for an hour in water with a cup of vinegar.  This draws out added nutrients.  Then the ox-tail pieces, a couple of sliced carrots, a coarsely-chopped onion, and a few garlic cloves cut in half lengthwise joined the party, which moved onto the stove.  I brought the whole thing to a boil, skimmed the scum off the top (there wasn't much this time) and then lowered the heat to near the lowest setting and let it simmer for about 24 hours.  About an hour before stopping the simmer I tossed in some sprigs of fresh thyme.  Then I turned off the heat, let it cool for a while, pulled out the solid pieces and then ran the broth through a fine mesh strainer into another big pot, which I put in the refrigerator.  When it was completely cool, I skimmed the fat off the top, and voilà: a big pot of jiggly, tan-colored, translucent magic.  You can store it in the fridge in mason jars or freeze in freezer bags.  You can also cook it down more later to make it more gelatinous.
I'm not terribly adventurous when it comes to cooking, so I haven't done a lot of different experiments with broth; but so far, what I have tried has been a success.  I've used it as the base for a lentil stew, for creamy pasta sauces (including good ole macaroni and cheese), I've added it to hot coffee with cream, and I've drunk it hot.  It makes creamy sauces even creamier and smoother, and it's delicious itself as a hot breakfast beverage with a spoonful of sour cream and a little salt.
What about the health effects?  I'm noticing a decrease in joint pain and dry eyes.  I'm feeling overall less inflamed.  It does a lot to quell my cravings, so it is an aid to fasting.  Especially I'm noticing an improvement to my eczema, which has been really plaguing me for weeks.  My skin feels softer, the itching has dramatically subsided and the lesions are beginning to heal.
I started out my bone broth adventure with a little bit here and a little bit there, but it is clear to me that the stuff needs to be a staple in my kitchen.  I can't recommend it enough.  It well repays the little effort it takes to make it.
Posted by Anita Moore at 10:13 2 comments:

Email ThisBlogThis!Share to TwitterShare to FacebookShare to Pinterest
Victory Topic(s): Counter-Revolution, Nourishing Traditions, Stuff About Me

The SSPX Weighs In

The SSPX holds that the collegial consecration has now been done, saying:

It seems that many bishops joined the Pope in this act. In Switzerland, for example, the bishops, who were gathered together to conduct their business, acted collectively. In France, Jeanne Smits toured the dioceses and noted widespread participation.

Moreover, several episcopates had announced their participation, even before it was asked of them. It is therefore possible to affirm that the world episcopate associated itself with the consecration of Russia to the Immaculate Heart of Mary, which was one of the conditions requested by Heaven.

The bishops of the SSPX also participated, although they used, not Pope Francis' text, but one based on a draft by Archbishop Lefebvre.  As a side note, the fact that the SSPX not only joined in Pope Francis' consecration but also now come out and says that the consecration has been done as asked will probably still not be enough to satisfy those who continue to maintain that the SSPX is in schism.

Bishop Athanasius Schneider also appears to be of the opinion that the consecration of March 25th was The Big One, and has composed a prayer, to be found on the website of his Confraternity of Our Lady of Fatima, for the grace for the Pope to approve the Five First Saturdays of reparation, and for the hastening of Russia's conversion and the advent of the promised period of peace.