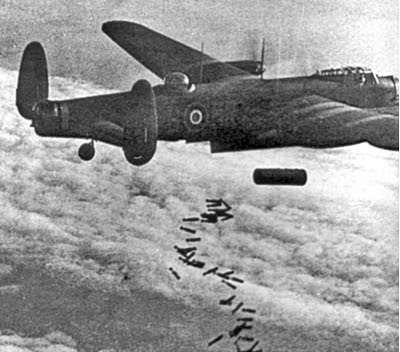 Put not your trust in princes: in the children of men, in whom there is no salvation.
Psalm 145:2-3

A reminder that today is the one-year anniversary of Benedict XVI's abdication inspired some reflections on the wild ride we have had since that day, both in the Church and in secular society.

For those with eyes to see, it should be clear that we are under chastisement.   Events are accelerating.  Everything we had taken for granted up to now, from bedrock institutions to moral principles, is disintegrating.  The capital of Christian civilization, built up over two thousand years, is nearly all frittered away.  The enemies of everything we held dear now have the upper hand, and they are busily engaged in destroying.  The unthinkable daily morphs into the commonplace.  One is more and more conscious of being an outsider, even among family and friends, as one is unable to join them in embracing socialism and homosexual unions and abortion and hatred of the Catholic Church, and a host of imaginary "rights", the pursuit of which is costing us our authentic rights.

A chastisement is meant to make us straighten up and start flying right.  But at the moment, too many people like what's going on.  There are a few who recognize the evil for what it is and deliberately choose it; many more, probably most, are deluded by the pursuit of their own comfort coupled with blindness to supernatural realities.  They think this is victory for the good guys.  They think things are finally going the way they should.  They look at wholesale destruction and see creation.  They look at murder and see mercy.  They look at oppression and see liberation.  They look at lies and see the truth -- whatever truth they find most convenient.

To too many people -- even many Catholics, including priests and bishops and religious -- what is happening does not look like divine punishment.  Since too many of us do not see this as punishment, not enough of us are straightening up.  That is why I fear we are in for something far worse than what we have seen up to now.

Who knows what form it will take?  Very likely, something that will hit us precisely where we are most complacent.  We have grown decadent in our wealth: even the poor in America have color televisions, cars, air conditioning and more than enough to eat.  And, for most of America's existence, she has enjoyed freedom from foreign invasion.  A dozen years after 9/11, we have sunk back into apathy.  Now that the United States is an oligarchy run by persons friendly to her enemies, perhaps it is only a question of time before our economy plunges into the abyss and the scourge of war lashes us in our own streets.

So, do we just give up and crawl back into our caves?  The time will come when that won't be an option.  But there is in any case no neutral ground: we have set before us life and death, and we must stretch out our hand to one of them.  We must choose life.

Should we pursue political remedies?  Of course.  I have advocated previously in this space for Mark Levin's proposed constitutional amendment convention, which the Founding Fathers had the foresight to provide for for times just like these.  But that is not going to be enough.  The chastisement will not be taken away until the reasons for it have ended.  Those reasons are in our own hearts, and our hearts need to be changed.  We need sorrow for our sins and purpose of amendment.  We need to do good and avoid evil.  We must be holy as God is holy.  For that, we need sanctifying grace.  I fear many people -- many Catholics -- are living without sanctifying grace.  I fear -- and it is horrible to consider -- that many are dying without sanctifying grace.

God is under no obligation to give us what we need to be holy if we don't ask for it, so we must pray, especially the Rosary.  The Rosary was given to us precisely for our times.  We must pray the Rosary not only for ourselves but for others.  It is the best thing we can do.  The time is coming, and may already be here, when it will be the only thing we can do.
Posted by Anita Moore at 15:46 3 comments:

The Saints in Art

Today I happened upon a rather striking image of the Presentation by Bl. Fra Angelico, the great artist of the Order of Preachers: 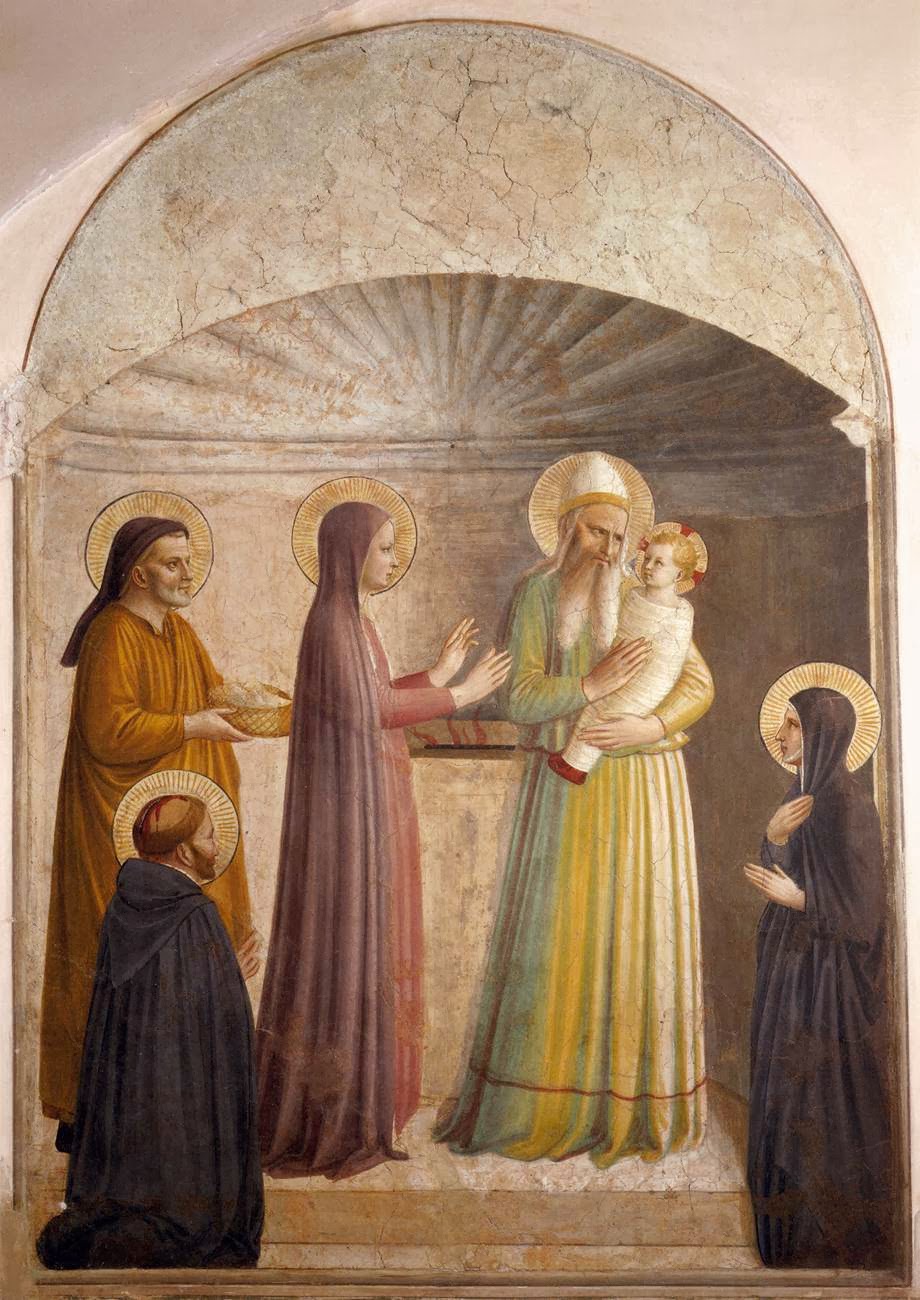 Fra Angelico frequently includes Dominican saints in his scenes from Scripture and Tradition.  At first glance, I assumed the kneeling friar was St. Dominic.  But upon closer inspection, it is clearly not St. Dominic.

St. Dominic is usually pictured with a star over his head.  There is no star over the head of this friar.  But look closely at his scalp.  His skull is split.

This is St. Peter Martyr, also known as St. Peter of Verona.  Born in 1205 in Verona, Peter was received into the Order of Preachers at age 16 by St. Dominic himself.  He was a great preacher, mystic and miracle worker, and was appointed Inquisitor for northern Italy by Pope Gregory IX.  Among other miracles, Peter predicted his own martyrdom, which took place near Milan, Italy on April 6, 1252.  Cathar assassins waylaid him on the road, striking his head with an axe and stabbing him.  Before he died, he traced in the dust, with his own blood, the first line of the Creed: Credo in unum Deum.  At the sight of Peter's saintly death, one of his murderers, named Carino, was converted and later himself took the habit of St. Dominic.

Just as the resurrected Christ is always shown with the pierced hands and feet of His Crucifixion, martyrs are also frequently depicted in art bearing their mortal wounds, or with the weapons that dealt them their death blow.  St. Paul, for instance, usually carries the sword that cut his head off; St. John Houghton, one of the Carthusians hanged, drawn and quartered under Henry VIII, is shown with a noose; St. Maximilian Kolbe is shown wearing his prisoner's uniform from Auschwitz.  This is not only so that their images may be recognized and identified.  It is also because these symbols of their martyrdom, which seem gruesome and squalid from the world's point of view, are really trophies of victory.  They were borne out of love, and are therefore these saints' glory in heaven.

Here is St. Peter Martyr and his split skull again, in this scene of the Madonna and Child, also by Fra Angelico. 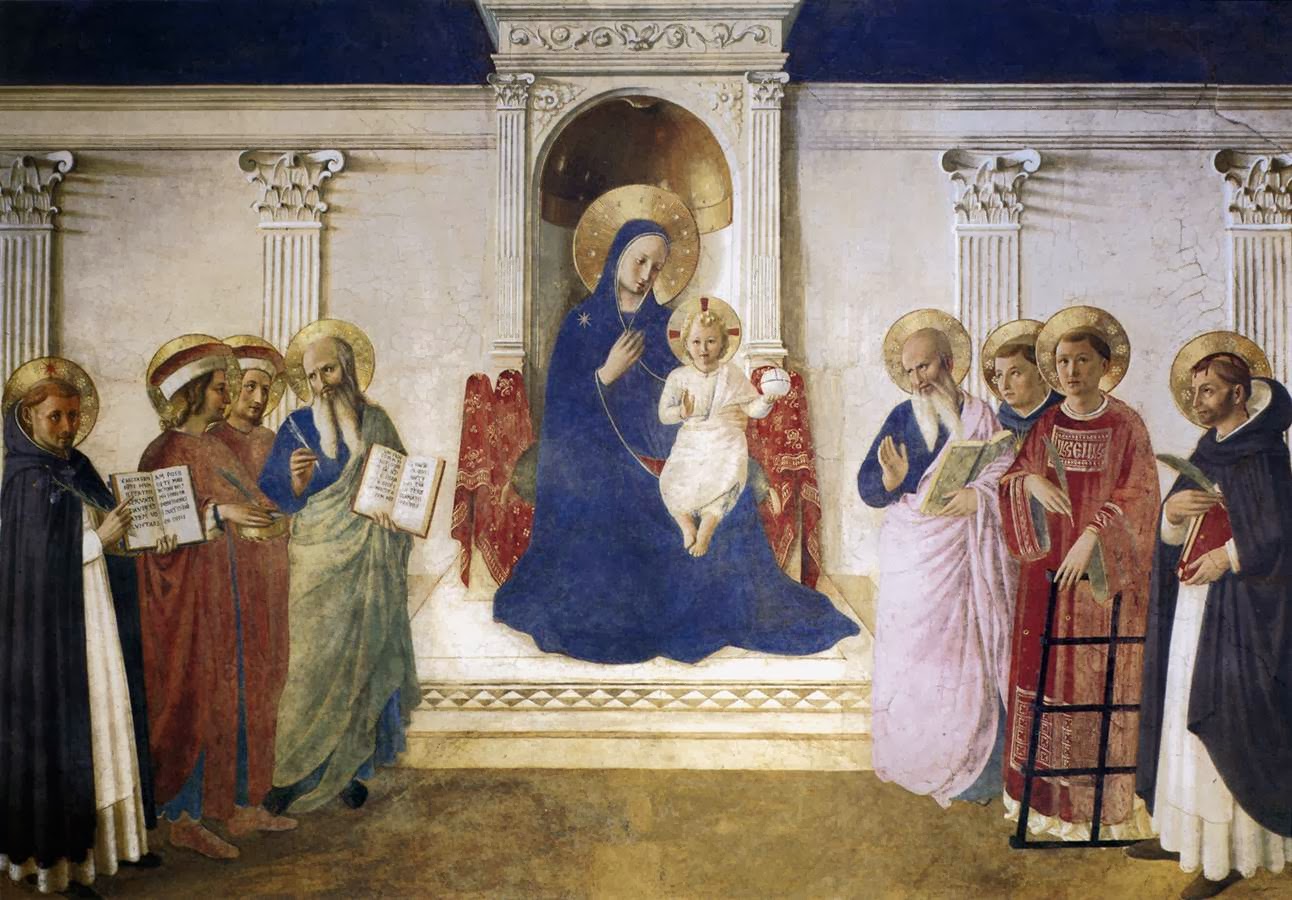 Here we have Sts. Cosmas and Damien, St. Mark, St. John, and St. Lawrence, who carries the grill on which he was roasted alive.  The three Dominican saints are recognizable by their distinctive emblems.  A star shines over the head of St. Dominic.  St. Thomas Aquinas, who, in his humility, tries to hide behind St. John and St. Lawrence, can nevertheless be recognized by the sun shining from his breast.  And St. Peter Martyr bears the ghastly axe wound that sent him into eternal life.  Notice, too, that the halo surrounding the head of the Christ Child contains the cross, while His Mother is crowned with twelve stars, like the woman clothed with the sun in the Apocalypse (Book of Revelation) of St. John.