Bishop Athanasius Schneider has published an essay today on the question of who has the right to judge a heretical Pope, and whether Benedict XVI is still the true Pope.

A big theme of this essay is something Bishop Schneider has stated before: that there is no human solution to a crisis like the one we have now under Pope Francis.  He thinks the Bellarmine Option, as it is coming to be known — that the cardinals can declare a heretical Pope to be self-deposed, and then go on to elect a new Pope — is a no-go on several grounds.  To what he says, I will add an opinion of my own.  If the Bellarmine Option were valid, it would probably never happen anyway, because by the time we get a heretical Pope, we’ve already got a largely corrupt and compromised set of cardinals.

Just because there is no human solution to this crisis, that doesn’t mean there is nothing for us to do.  Bishop Schneider:

The Church is ultimately not a human but a divine-human reality. She is the Mystical Body of Christ. Attempts to resolve the current crisis of the papacy which favor the opinion of St. Robert Bellarmine with its concrete solution, or take refuge in the unproven theory of Benedict XVI still being the only true pope, are doomed to fail from the start. The Church is in the hands of God, even in this most dark time.

We must not be lax in proclaiming Catholic truth and warning and admonishing when papal words and actions clearly harm the faith. But what all true sons and daughters of the Church ought to do now is launch a serious world-wide crusade of prayer and penance to implore a divine intervention. Let us trust in the Lord’s words: “Will not God give justice to his elect, who cry to him day and night? Will he delay long over them?” (Luke 18:7).

What the Coronavirus Tells Us About Trump and the Left

What does it take to contain a deadly contagious disease?  Closing the borders and curtailing international flights into the country would seem like an obvious step, which some countries are taking.  But how would safety measures affect the daily lives of those who are already within the country?  In China, the virus has provided the communist government with an excuse to crack down further on churches.  Italy has also forbidden public worship, while leaving markets and sports venues open.  Japan is closing schools.  In a pandemic, or a perceived pandemic, the government might, among other things, forbid all public gatherings, including church services; impose curfews; suspend commerce; curtail the movements of citizens; and generally prevent people from going about their daily business.  These prohibitions and restrictions would of, course, all be backed by the use of the state’s coercive police powers.

The potential for the government to turn tyrannical, under the guise of safeguarding public health and safety, is obvious.  Chaos causes people to start looking around for a savior.  The more we feel threatened by mortal dangers, the more ready we are to support draconian remedies.  A panicky populace is low-hanging fruit for power grabbers.  It follows, then, that before we start surrendering our liberties to the government in the name of dealing with a national health emergency, we should make sure that we are in fact in an emergency.  We need to be skeptical of anyone who tries to whip us up into a frenzy.

Who has been trying to foment panic about the coronavirus?  People are terrified based on what they see in the news.  President Trump has been saying we have it under control, and the Democrats are decrying what they characterize as his non-action.  They are wailing that he is not allocating enough money to the problem.  At his press conference last night, reporters tried to accuse him of hypocrisy for handling the coronavirus in a manner that they implied was consistent with Obama’s handling of ebola, which Trump criticized.  The city of San Francisco has gone as far as to declare a state of emergency, before even a single documented case of the virus was detected there. The media are breathlessly declaring their hope that the coronavirus is Trump’s Benghazi, thus proving that their emphasis is not on alleviating human misery, but capitalizing on it.

Notice that Trump, whom the liberals have declared a threat to democracy and a tyrant in the making, has done none of those things.  He acknowledges that there is a potential threat, but he is encouraging the country to be calm about it, and to take common-sense precautions.  He has formed a team to cope with the disease, and he has stated that he does not believe it is inevitable that it will become a pandemic in this country, where the number of documented cases is in the double digits.  And he’s absolutely right.  It does not need to become a pandemic, if we take the appropriate small steps before larger ones become necessary.

If Trump were the power-mad totalitarian the left accuses him of being, he should be using this coronavirus scare as an opportunity to take over the daily lives of American citizens.  He’s not doing that.  The left, on the other hand, is using the scare as an opportunity to try to whip the American people into enough of a frenzy to demand the takeover of their lives.

I think this tells us everything we need to know.
Posted by Anita Moore at 14:53 4 comments:

What If He Is? 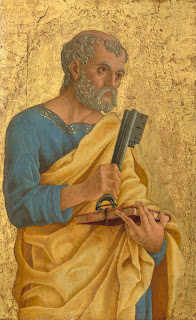 There are people in the Catholic world who have dedicated their lives to the proposition that Pope Francis is an antipope.  This proposition is their opinion, and no one is bound to go along with it.

I myself am capable of having no more than an opinion on the subject, and nobody is required to agree with me, either.  I am on record as saying that I don’t think Francis is an antipope, and that we have had a “Spirit of Vatican II” Pope coming for a long time.  I think Benedict XVI abdicated in 2013, and I don’t buy the argument that he intended to abdicate only part of the Petrine office while retaining part.  At the time of his abdication, he called for a conclave to elect a new Pope, which seems to me a striking proof of his intent to cease being Pope.  That conclave was held, and we got Pope Francis.  Since Christ is not idle in this process, and is not Himself a manipulator, and cannot be fooled or stymied by grammatical errors or semantics games, I believe He stripped Benedict of the Petrine office and conferred the same on Francis.  I think the “antipope Bergoglio” crowd is operating on mistaken beliefs about the scope of papal infallibility.  And, I think they are in great danger of  ultimately falling into schism, and taking others with them.  Why?  In the seven years since the last conclave, Pope Francis has stacked the college of cardinals, which means the next conclave will be populated mostly — if not entirely — by his nominees.  This puts the Benedict-is-the-true-Pope people on the greased skids to sedevacantism, since, if Francis is not the true Pope, then his appointments to the college of cardinals are illegitimate, and no one these putative cardinals elect can be the true Pope.  Thus will they be compelled in the end to hold that the line of true Popes has died out, and that the Chair of Peter is vacant.

Is it possible that I’m wrong?  Of course it is.  I’m not a theologian, I’m not a canon lawyer, and I haven’t been given the gift of infused knowledge.  The same goes for some of the most strident proponents of the “antipope Bergoglio” theorem, who essentially argue it from their own authority.

What I want to know from the people who have made a full-time career out of jumping up and down screaming about this is: let’s say Francis is not in fact the true Pope.  What exactly are we in the pews meant to do about it?  What can we accomplish by dwelling on this as much as you do?  What authority do we, or you, have to remedy this?  How much good are you doing to the Church by attacking your fellow Christians who disagree with you?  Because, quite honestly, that is what you seem to devote most of your time and energy to doing.

In asking these questions, I am not taking a quietist stance.  Quietism involves failing to do what lies to hand.  We do not fall into quietism by acknowledging our limitations.  It is not clear what lies to the lay hand in this crisis, other than repentance, conversion, prayer and fasting.  But this is not nothing.  On the contrary, it is everything.  Scripture makes it pretty clear that if we want God to rescue us from disaster, we have to turn to Him with our whole heart.  It also says that if we love God, we will obey His commandments.  But when do we have time to do that if we have made a career out of sniping at other Catholics who acknowledge — not unreasonably — Francis as the true Pope?

If this crisis is resolved on the side of Pope Francis being an antipope, I will be too busy rejoicing that the crisis has been resolved to be embarrassed about being wrong.  But I fear for the people who have so much invested in their antipope theory.  They are liable to not recognize and entirely miss out on the resolution when it comes, if it does not fit in with their expectations.  That would be a tragedy.