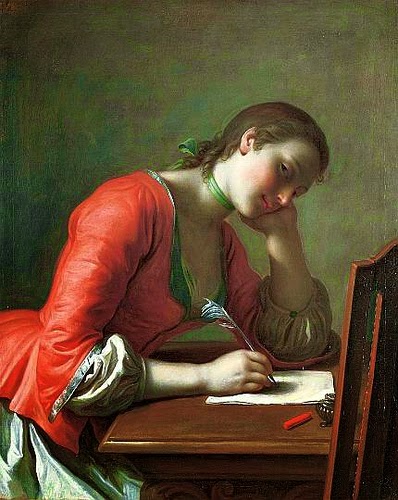 -- The secular lay members of the Mystical Body of Christ have their own role to play in the history of salvation and a special dignity all our own that is different from that of priests and religious.  It is crass clericalism of a major order to think that the secular lay faithful are not fully participating in the life of the Church unless we are engaged in a flurry of activity at Mass or otherwise doing things that priests ought to be doing.

-- That last point bears a little closer examination.  Has anybody besides innocent spouses noticed that no-fault divorce is just a great, big redistribution scheme?  File for divorce, and suddenly, your property isn't your property anymore: the marital estate -- not to mention the separate income of the spouse who makes the most money, even if he is not the one who filed -- gets turned over to the legislature and the courts to distribute as they see fit.  This kind of power in the hands of government perverts the mission of government, which should be to protect society's building-block institutions.  That is why the law favors those who set out to torpedo their families, and leaves those who want to stay together without any recourse.

-- Think you know all about the "Red Scare" and the Hollywood blacklist?  Did you know, for instance, that every single one of the Hollywood Ten was in fact an active member of the Communist Party and had pledged his allegiance to the Soviet Union?  Did you know that, in an effort to gain control over the movie industry, the Communists instigated two bitter, violent and ultimately fruitless strikes of behind-the-scenes studio employees in 1945 and 1946?  Did you know that the blacklist was actually instituted by the studios themselves -- not by the government -- in response to the defiant performance of the Hollywood Ten in front of the House Un-American Activities Committee in 1947?  If not, then you need to read Hollywood Traitors: Blacklisted Screenwriters: Agents of Stalin, Allies of Hitler by Allan H. Ryskind.

-- It is always the priests who have to add their little ad-libs to the Mass, or take out parts of the Mass they don't like, who can't faithfully say the black and do the red, who have the greatest reputations for humility and pastoral-mindedness.  This proves that we no longer have a clue in what humility consists.

-- I am happy to be able to report that it has been some years now since I have seen sand or twigs or nothing at all in local holy water fonts during Lent.  But if you are unfortunate enough to live in a place where that foolishness still goes on, don't just take it.  Carry holy water around (REAL holy water, blessed according to the Rituale Romanum -- find a priest willing to do this and create a big supply) and fill the empty fonts, dumping the debris when necessary.

-- Fr. Chad Ripperger is a big proponent of spiritual contracts.  A spiritual contract is when you ask God that, every time you say a particular prayer or do a particular good work, He understand you to be offering that prayer or work for some intention.  That way, you can always pray for the intention even when you are not consciously thinking about it at the time of the prayer or work.  Here is an example of some of my own spiritual contracts.  I like to say the Litany of the Sacred Heart after every Holy Communion.  I have marked particular lines in the Litany with the names of people for whose intention I want to pray every time I say that line.  Sometimes, I just say that line as an aspiration; and every time I do, I am praying for that person.  I also have spiritual contracts tied to some of my daily prayers.  The thought that I am praying for the intentions of people I love every time I say some part of those prayers helps me to persevere in prayer even when I don't feel like it.

-- In these days of institutional rottenness both in the Church and in the secular world, we are told that those who speak out against this rottenness and who try to restore what has been destroyed are "divisive" and "uncharitable."  Bl. Clemens Graf von Galen, the Lion of Münster, teaches us how to respond to this accusation:

My Christians! It will perhaps be held against me that by this frank statement I am weakening the home front of the German people during this war. I, on the contrary, say this: It is not I who am responsible for a possible weakening of the home front, but those who regardless of the war, regardless of this fearful week of terrible air-raids, impose heavy punishments on innocent people without the judgment of a court or any possibility of defence, who evict our religious orders, our brothers and sisters, from their property, throw them on to the street, drive them out of their own country. They destroy men's security under the law, they undermine trust in law, they destroy men's confidence in our government. And therefore I raise my voice in the name of the upright German people, in the name of the majesty of Justice, in the interests of peace and the solidarity of the home front; therefore as a German, an honourable citizen, a representative of the Christian religion, a Catholic bishop, I exclaim: we demand justice! If this call remains unheard and unanswered, if the reign of Justice is not restored, then our German people and our country, in spite of the heroism of our soldiers and the glorious victories they have won, will perish through an inner rottenness and decay.

-- Things in the Church have been so bad for so long that we are ready to leap on any little crumb of comfort -- any tiny sign, for instance, that in fact we have been mistaken all these years about our pastor or our bishop being a doctrinaire leftist, or that reverence will soon be restored in our local parishes -- in the frantic hope that it portends a change for the better.  But once we have devoured that crumb, we see that nothing has really changed, and we feel emptier than ever.  We may  have to endure even worse times before authentic reform comes.  But when it does come, we will not need to wonder whether it is here.  It will be unmistakable.
Posted by Anita Moore at 12:58 No comments: 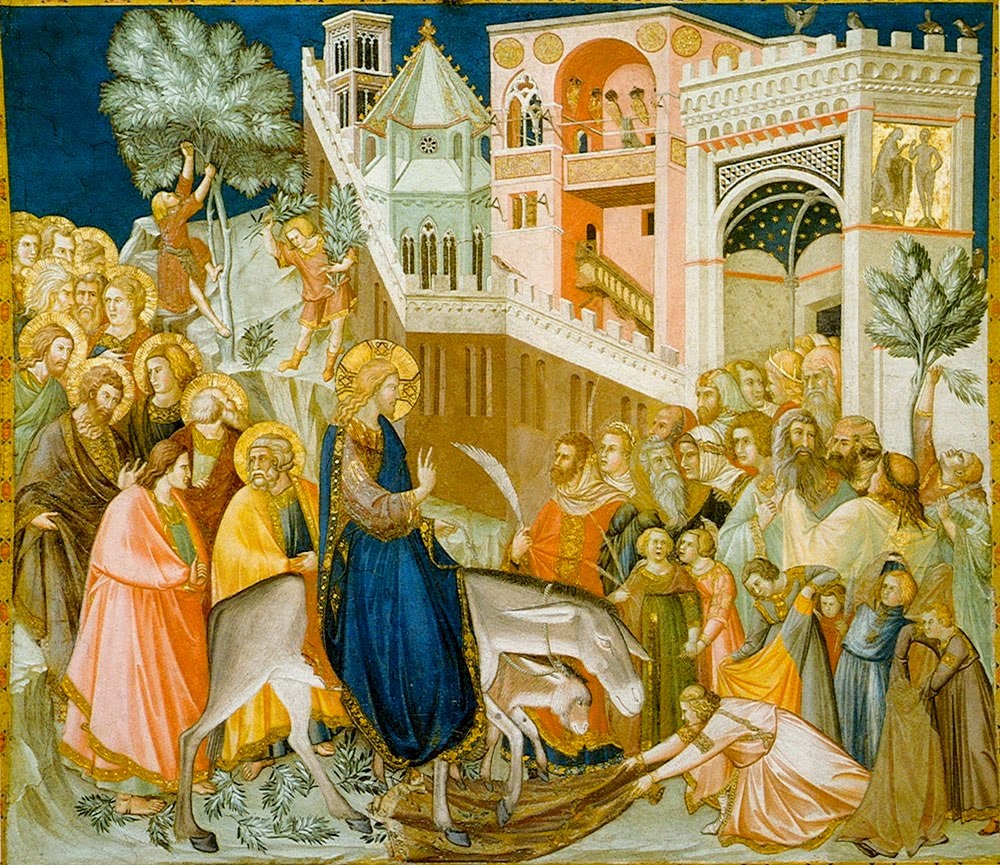 With liberals, everything is always about politics, which means the rest of us must constantly be indoctrinated, lest we fail to see the light.  We can't just have music: we have to have some message set to a tune.  We can't just have a novel: we have to have an attitude adjustment.  We can't just have plays or movies: we have to have leftist sermons disguised as entertainment.  Even religion isn't safe from this busybody interference.  We can't just have Holy Mass, or Vespers, or the Rosary, or Stations of the Cross: our once Catholic worship and devotions have to be salted down with a heavy seasoning of philistinism, narcissism, secular humanism and even downright Marxism.  It is always during this, the holiest week of the year, that the top is off the salt-shaker and the spoons and castor oil are out, and we are lined up to take our medicine.  It is time for us once again to be force-fed our annual lessons in "gender" theory, beginning with the reading of the Passion on Palm Sunday and culminating in Holy Thursday with the washing of the feet.

These days, during the reading of the Passion, and while a multitude of men stands around, we have women reading the parts of St. Peter and Pontius Pilate, and men reading the part of the maidservant who confronts St. Peter.  Why is this a big deal?  Because, apart from the fact that it is jarring to hear a woman reading St. Peter's lines, it is obvious that this is not being done out of necessity, since there are plenty of men around; it is clearly being done to make a point, even if those who orchestrate it vehemently deny it.  One grows weary of being peppered by these little points during Mass.  It is hoped that eventually we will grow so used to them that we start ignoring them -- and therein lies the danger.  To ignore them is to be anesthetized, and therefore compliant.  This sort of thing prepares us, gradually, to accept the lie that there is no difference between men and women. Each time one of these little stunts is pulled, that is one more degree added to the temperature of the pot of water that we frogs are sitting in. And the lie has broad and deep implications. If it is true that there is no difference between men and women, and men and women do not each have their proper roles and inclinations ordained by God in virtue of their different endowments, then there is no reason why marriage should only be between one man and one woman; there is no reason why children need both their mothers and their fathers; and ultimately, the union of Christ, the divine Bridegroom, and His spotless Bride, the Church, is a joke.

The gender-bending and general confusion in secular society about the nature of maleness and femaleness is being harnessed by the women's ordination crowd within the Church.  We need to get it through our thick skulls that there is no real difference between the sexes, you see, so that we will realize what an injustice it is that women cannot be ordained to the priesthood.  The inherent dignity of women demands that they have a role at the table too, and not just as sacristans or preparers of meals or on cleaning crews, the argument runs; therefore, women must swarm the sanctuary, must read the male lines in the reading of the Passion, and must have their feet washed -- even though the rubrics of the Mass specify that only men are to have their feet washed, as they symbolize the all-male college of Apostles.

But this line of thinking betrays a worldly mindset as well as a total lack of understanding of the self-immolation that is the ordained priesthood.  If the inherent dignity of women demands that they have a role "at the table" -- which seems to be how we now think of the Altar of Sacrifice -- why wasn't the Mother of God there at the Last Supper; or, if she was there, why wasn't she mentioned in Scripture? If any woman deserved a place "at the table," surely it was she.  Perhaps the answer is that the Mother of God, rather than standing on her dignity, took her (unglamorous) place at the blood-soaked foot of the Cross, which is identical to the Mass.  Besides: is there something undignified about being a sacristan or preparer of meals or on a cleaning crew?  Generations of saints, including the Mother of God herself, might disagree with such a proposition.

The Mass is the August Sacrifice of Calvary, where our redemption was won and the powers of hell were decisively defeated; it is not a forum for politicking, and the faithful are not there to serve as a captive audience for liberal propaganda.  For years, the world has been telling us that the sexes are fungible and that sexual identity is purely a societal construct that has nothing to do with nature. This is patently false. Why, then, are we Catholics buying into the gender-bending ideology, and why are we applying it to the Mass?
Posted by Anita Moore at 20:49 2 comments: