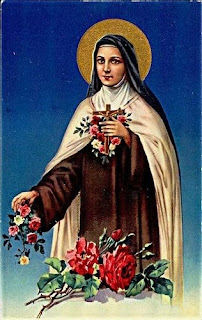 -- She loved flowers, and loved gathering them and wandering through fields full of them; she gave all this up when she entered Carmel. But her dreams were filled with flowers, and she delighted in taking her novices out to strew rose petals on the great stone crucifix in the courtyard of the convent, always choosing the best ones. When she missed some particular flower in the bouquets that decorated the altar, it would turn up in short order.

-- She loved snow. On her Clothing Day, she had a secret desire to see nature clad in white like herself. And so it was done, even though the temperature and climate were all against it.

-- She wanted to be a saint. She became a saint.

Thérèse wanted to be an apostle and a missionary, and even made plans to join the missions in Asia, but was prevented because of her health. She wanted to travel to all five continents at once and win souls for God.

The Carmelite community of New Caney, Texas remembered this when Col. Ron Garan, an astronaut aboard the Discovery mission in May and June, asked for their prayers for his mission and offered to take something into space on their behalf. So for his flight, they gave him a relic of St. Thérèse.

And commended to her intercession the whole world, around which she circled for 14 days, logging a total of 5,735,643 miles.

Why does God still fall all over Himself to grant Thérèse's every tiniest wish? Because she never stopped falling all over herself to fulfill His will. Most of us can't exactly claim to do the same; and then we wonder why we make such a pig's breakfast out of our lives.

So maybe commending ourselves to her intercession would be a step toward fixing that problem.
Posted by Anita Moore at 05:33