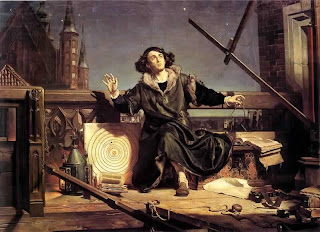 Motor terrae, solisque stator: "he stayed the sun and freed the earth." This motto is applied to Nicholas Copernicus, whose observations of the sun, the moon and the planets gave rise to the revolutionary heliocentric planetary theory, and ultimately laid part of the groundwork for the formation of the Gregorian calendar.

And as a result of checking in with Dr. Ed Peters' canon law blog today, I found out a few more things about Nicholas Copernicus that I had not previously known:

-- Copernicus was a deacon and a canon lawyer. He may have been ordained to the priesthood later in life, but this is not certain.

-- In addition to the foregoing, although he never took a degree in medicine, Copernicus also practiced as a physician, serving the poor at no charge.

-- Biggest surprise of all: according to Catholic Encyclopedia, Copernicus' entire family -- including, presumably, the man himself -- were Third Order Preachers.

Maybe it shouldn't be such a huge surprise after all, inasmuch as the patron saint of astronomers is -- St. Dominic.
Posted by Anita Moore at 18:02