Why the Catholic Faith Is Not for Wimps 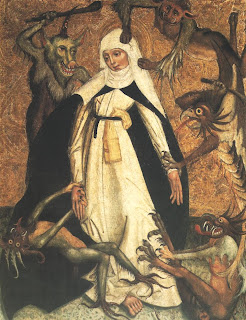 Somewhere along the line, Christianity got reduced to a school of self-esteem, self-improvement therapy, founded by a granola-eating, Birkenstock-wearing, protest-marching Jesus Who came to teach us all to make love, not war, laugh heartily, breathe deeply and recycle. A Jesus Who makes no demands on us. A Jesus Who shelters us from all tribulations. A Jesus Who makes us feel good (and if you don't, it's because you haven't got any faith).

Was there ever a faith that that was harder on its most faithful adherents? Consider what good Catholics have endured down the ages:

Battles against Demons. Great saints withstand horrific attacks from Hell -- sometimes (as in the cases of, say, Curé of Ars and Padre Pio) physical attacks; and it is precisely because they are faithful that they are able to do so. We are all required to withstand temptation, however fierce, and we are given the means to do so; and even though it's never easy, we are never without the means to prevail. Today's post illustration is an early 16th-century tempera painting of St. Catherine of Siena being assaulted by devils. Hideous, horrible, frightful creatures coming at her from every side, clawing and grabbing and tugging her in all different directions -- but do you notice the serenity of her countenance?

Battles in Defense of the Truth. We tend to be protective of our favorite sins, and resent nothing so much as having them exposed for what they are. It therefore requires considerable courage to tell the truths that nobody wants to hear. Consider St. John the Baptist, who lost his head for telling King Herod the truth about his incestuous "marriage" to Herodias. Or St. Thomas More, who, after a long imprisonment, lost his head for speaking the truth and standing up for the Faith.

Battles Against the Odds. God sometimes asks us to do what seems to us impossible, and to trust in Him for His help, conquering both our fear and our self-will. Consider:
-- God told St. Joan of Arc, an uneducated peasant girl, to find the rightful King of France and restore him to his throne. This unlikeliest of generals personally led armies and accomplished her mission. And it cost her everything.
-- God called St. Joseph of Cupertino to be a priest, despite the fact that he was so (apparently) absent-minded and stupid as to be practically non-functional and hopeless in the world. There was only one passage in Scripture that St. Joseph could expound upon; miraculously, it was this verse he was asked to expound upon in his oral examination. Because of his performance in this examination, he was passed for ordination. But he had to suffer all kinds of indignities and humiliations to the end of his days.
-- St. John Vianney was a hopelessly poor student who worked hard for his failing grades in seminary; but he went on to become not only a priest, but the patron saint of parish priests. He spent decades pouring himself out daily, spending hours and hours in the confessional, living on a bare subsistence diet and a very few hours of sleep at night.
-- St. Gabriel Possenti, a young, frail Passionist monk, single-handedly drove a gang of marauders out of town with a pair of their own pistols. He had traded in the pleasures to which his youth was devoted for a life of austerity and sacrifice.

Battles against Our Own Evil Tendencies. No doubt about it: we are our own worst enemies. Sometimes the devil doesn't need to tempt us, because there's nothing he could do to us worse than what we do to ourselves. Jesus forgave Mary Magdalene her sins of dissolution, but admonished her to sin no more -- no easy proposition in the case of deeply-rooted sinful habits. But the saints do it. For love of God, St. Mary of Egypt gave up a seventeen-year career as a prostitute; St. Augustine gave up the concubine who had borne him an illegitimate son; St. Phillip Howard gave up womanizing and general dissolution at the court of Queen Elizabeth I; St. Gabriel Possenti gave up the wine, women and song that were leading him on a downward path.

Martyrdom. We must be prepared suffer everything, and even to die the most horrific death rather than deny the Faith. Every one of the Apostles was martyred. Most, if not all, the Popes from the time of Peter to the time of Constantine were martyred. Christians have been imprisoned, tortured, starved, abused, had their families broken up, had all their property confiscated, because they would not deny the faith. We are expected to undergo all of this if necessary, or suffer eternal damnation.
No other faith promises rewards as great as those promised by Christ; but was there ever a faith that was stricter and more demanding? The Faith is uncompromising with the Truth, because evil is uncompromising. Evil is a ruthless plague that calls for a stern remedy. Such a remedy is the Catholic Faith.

And amazingly, herein lies the appeal of the Church. Where the Faith is strong, forceful, direct and undiluted, churches are packed; where it is sissified and emasculated, the pews are empty. Where the Church is confident and straightforward, and unafraid to call sin by its right name, the tide of malice in the world is stemmed. Surely, the rise of vice and immorality in the Western world is due in no small part to the moral confusion within the Catholic Church in recent decades.

Authentic Catholicism is not for wimps. But unlike the Alan Alda/Michael Kinsley variety, it does work every time it's tried.
Posted by Anita Moore at 04:57