Scared Straight (And Other Methods of Reaching Sinners) 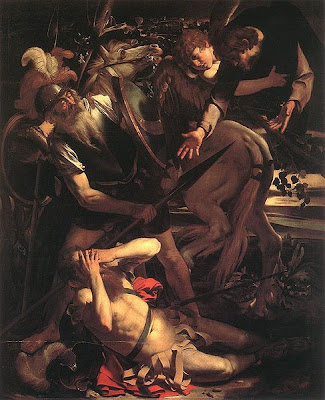 Herewith some dramatic conversion stories. If you've ever wondered what a "signal grace" is, these probably qualify:

St. Lucian (martyred c. 250). Lucian started out as a devil worshipper. One day he tried to cast a spell on a Christian woman, who made short work of it just by making the Sign of the Cross. That straightened him up, and he spent the rest of his days preaching against his former errors.

St. Genesius of Rome (d. c. 303). Genesius was a pagan Roman actor. While onstage in a play that mocked Baptism, he was suddenly converted, and refused to finish the play. He was martyred during the persecutions of Diocletian, and his memorial is August 25th.
St. Mary of Egypt (c. 344-c. 421). Spoiled, cynical and rich, Mary ran away from home at the age of 12 and launched on a 17-year career as a dancer and prostitute in Alexandria, Egypt. Then, one day, she tried to enter a church but found herself physically unable to open the door. This moved her to repent and call upon the intercession of the Blessed Mother, who told her to cross the Jordan River in order to find rest. From that point forward, she lived a solitary life of penance. Her memorial is April 3d.
St. Hubert of Liege (656-727). Hubert was a dissolute young courtier whose passion for hunting led him to disregard solemn holy days. While out hunting a stag on Good Friday, he saw a crucifix between the stag's antlers and heard a voice warning him that if he didn't straighten up, he would soon find himself in Hell. When his wife died, he gave up all his worldly goods, became a priest, and was eventually made bishop of Maastricht. Known for his preaching and his charity toward the poor, he is titled the Apostle of the Ardennes. He died reciting the Our Father in 727, having predicted the date of his death. His memorial is November 3rd.

St. Vladimir I of Kiev (956-1015). Vladimir started out as a bad guy. A really, really bad guy. He was not only a keeper of numerous wives and concubines but also a fratricide and a thoroughgoing pagan who may have actually participated in human sacrifices (he is the patron of murderers -- obviously for their conversion). He educated himself about Christianity for purposes of preparing to wage war against the Graeco-Roman Empire, and tried to extort the Byzantine Emperor into giving him his sister in marriage in exchange for not marching on Constantinople. When the Emperor replied that his sister could only marry a Christian prince, Vladimir agreed to accept Baptism. Baptism led to a host of astounding changes. Vladimir married the princess, got rid of the excess wives and the concubines, destroyed all the idols in his country, and underwent a dramatic character change. By the end of his career, this previously ferocious prince was well known as a mild and compassionate ruler. His memorial is July 15th.
Bl. Villana de Botti (1332-1361). As a young girl, Villana ran away from home to enter a convent, but was refused admittance, sent home, and then married off. After this, she became lazy and worldly, and gave herself up to the pursuit of pleasure. One day, while she was getting dressed for a party, she saw the vision of a hideous demon in her mirror. Running to all the mirrors in the house, she saw the same thing in each one, and realized that she was seeing the state of her soul. She promptly gave up frivolity and ostentation, became a Dominican tertiary, and led a life of holiness. Her memorial is February 28th (the order celebrates it on January 29th).
St. Philip Howard, 20th Earl of Arundel (1557-1595). Philip, the son of Protestants, was a member of the court of Queen Elizabeth I, where he distinguished himself in the field of libertinism. He was present at the trials of martyr priests, including St. Edmund Campion who, though physically weakened by torture and imprisonment, and denied materials with which to prepare for trial, nevertheless succeeded in captivating most of his listeners. His witness and and that of other priests haunted Philip until he finally made his peace with the Church. Philip would go on to be condemned to death himself for the Faith, though instead of being executed, he was kept languishing in prison, never knowing which day would be his last. What must have been the supreme trial of his faith came toward the very end, when the queen offered to grant him his only remaining request, namely, to see his wife and son one last time, if only he would return to Protestantism. He refused, and died shortly thereafter. His memorial is October 19th.

Fr. Marie-Alphonse Ratisbonne (1814-1884). Alphonse Ratisbonne, the scion of a Jewish banking family, was a worldly-wise and wise-assed youth who drifted from atheism to agnosticism, and who, after his brother Theodore converted and became a Catholic priest, conceived a rabid hatred of the Church. During a tour of Europe, shortly before he was to have married his own niece, Ratisbonne found himself in the company of a Catholic nobleman who predicted that he would become a Christian, and challenged him to wear a Miraculous Medal and recite the Memorare. The use of this medal and the recitation of this prayer, coupled with the prayers of the nobleman and his friends, culminated in a vision of the Blessed Mother, during which Ratisbonne received the gift of infused knowledge and understanding of the Faith. Within a fortnight, he received Baptism and Holy Communion, and afterward became a Jesuit priest. Later, with permission from the superior general and the Holy See, he left the Jesuits in order to assist his brother Theodore, founder of the Congregation of Our Lady of Zion, whose mission was to promote the conversion of the Jews. In 1855, Ratisbonne moved to Palestine, where he lived out the rest of his life as a missionary. Unfortunately, the Congregation -- at least in the American/Canadian province -- has now abandoned its mission, becoming little more than a society of middle-aged female social workers.