On the Feast of All Saints: The Odor of Rottenness Transformed 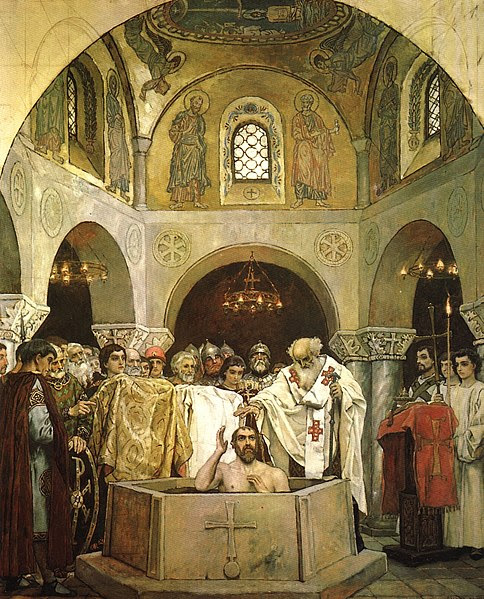 Today the Church celebrates all the blessed in heaven, whether known or unknown. In his homily, Father highlighted the fact that, although there is one basic path to sainthood — doing the will of God — saints are not printed off a copy machine: every saint is distinct from all others.  This got me to thinking about St. Vladimir I of Kiev (956-1015), who began as an evil-smelling specimen of the raw, rank, raunchy Slavic paganism of the early Middle Ages, yet managed, thanks to God’s grace, not only to die in the odor of sanctity himself, but to arrange for countless others to do likewise. He is honored as the man who Christianized the people of Kiev, and is patron, among other things, of Russia, of converts, of parents with large families and — murderers.
I cannot help comparing St. Vladimir with another pagan ruler who became a saint, King St. Aethelberht  of Kent.  Both were devoted to the worship of gods who demanded gruesome rites, including human sacrifice.  But unlike St. Aethelbehrt, who possessed a certain amount of natural goodness and decency even before his conversion, Vladimir was far from exhibiting those virtues for which the saints are often renowned.   He made war on his brother, whom he eventually slew after the latter surrendered; slew a prince and took his daughter to wife; took several other wives and numerous concubines, by whom he had a boodle of children; and set up a great many shrines devoted to Slavic pagan gods.  It is thought that Vladimir also may himself have participated in rituals involving human sacrifice — not a stretch for a fratricide.
Although Christianity was quietly and secretly blossoming in the lands under his rule, it was not until 987, while planning a campaign against the Graeco-Roman empire, that he began to be interested in Christianity.   He sent envoys to study the religions of various neighboring lands, and received glowing reports about the beauty of the Divine Liturgy celebrated at Hagia Sophia in Constantinople.  Thus was the finger of God, as Whittaker Chambers put it, laid on his forehead.  In 988, after beseiging the city of Kherson in the Eastern Roman Empire, Vladimir sent an embassy to Emperor Basil II of Constantinople asking for his sister Anna's hand in marriage, and threatening to march on Constantinople if he refused. The Emperor replied that a Christian could only marry another Christian, so only if Vladimir were a Christian prince could he sanction such a match. Vladimir replied that he had studied the Christian faith and was inclined favorably to it, so that he was ready to accept Baptism.
Which Baptism took place that same year, as depicted above by the Russian artist Viktor Vasnetsov, and was not without its effects.  Vladimir emerged from the laver of regeneration a changed man.  He married his Christian princess, Anna; returned the city of Kherson to its rightful ruler; returned to Kiev with his new bride; got rid of all his other wives and concubines, and set about expunging paganism from within his borders.  Catholic Encyclopedia describes the opening of his campaign:

When Vladimir returned to Kieff he took upon himself the conversion of his subjects. He ordered the statues of the gods to be thrown down, chopped to pieces, and some of them burned; the chief god, Perun, was dragged through the mud and thrown into the River Dnieper. These acts impressed the people with the helplessness of their gods, and when they were told that they should follow Vladimir's example and become Christians they were willingly baptized, even wading into the river that they might the sooner be reached by the priest for baptism. Zubrycki thinks this readiness shows that the doctrines of Christianity had already been secretly spread in Kieff and that the people only waited for an opportunity to publicly acknowledge them.

Vladimir did become known as a mild and devoted ruler (having given up warmongering), and was zealous for the spread of the Christian faith. Although two of his sons were later recognized as saints in their own right (Boris and Gleb), his later life was dogged by the intransigence of some of his older children. Vladimir died on the march north to deal with his rebellious son Yaroslav in 1015, and his feast is celebrated on July 15th.
Vladimir's conversion and subsequent recognition as a saint provide us with a striking example of the powers of Baptism, even in the case of a man with multiple murders and fornications on his conscience, whose appallingly evil life should have landed him in the bowels of Hell. Mere good will on Vladimir's part — especially mixed as it appears to have been, at least in the beginning, with political motivations —could never have been enough on their own to give him the purpose of amendment he obviously exhibited after Baptism, let alone save his soul.  But this crack of the door, however slight, was more than enough for God to penetrate with His grace.  Here is proof, if more is needed, that Baptism is no mere symbol.
So, on this feast of All Saints, let us raise a glass of vodka to St. Vladimir of Kiev and to all the repentant sinners whose overpowering stench, like that of Lazarus, dead and entombed for four days, was transformed into the sweet odor of sanctity, which rises like incense to God and pleads with Him that each of us may one day swell their ranks in heaven.
Posted by Anita Moore at 16:37