Holidays: A Foretaste of Heaven 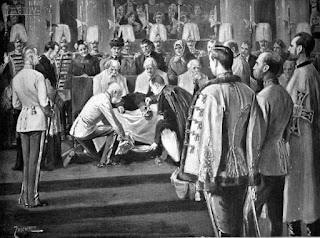 In his book about Bl. Charles of Austria, Charles Coulombe has a passage describing in detail the Holy Thursday ritual of the washing of feet by the Emperor.  Twelve poor old men would be chosen and transported by carriage to the Hofburg in Vienna.  A four-course meal was laid out before them, then taken away.  The Emperor himself would then wash the feet of each man, and hang a bag containing thirty silver coins around the man’s neck.  Afterward, the men would be transported home by carriage, with royal attendants bearing the four-course meals which were given to them as a gift, dishes and all.  The Empress would perform a similar ritual with twelve poor old women.
Coulombe, to whose podcasts I have become addicted, often urges his listeners to celebrate holidays and holy days and observe them as well as possible, with as much cheer as possible, no matter what else is going on in the world.  I was thinking about this and the above-described observance this morning in connection with the mania this year of our Elders and Betters to deprive us of Halloween, Thanksgiving and Christmas after having shut down the public celebration of Holy Week and Easter.  I thought wryly to myself: what a better place this world is for our having gotten rid of the Emperor’s foot-washing ceremony!  How New and Improved we are!
Then a couple of realizations hit me.
First, the realization that holidays and all the good things that attend them are valuable not so much for their own sakes, but as a reminder and a foretaste of heaven, for which we are made.  Every good thing, every rightly-ordered pleasure, every bit of innocent fun, everything warm and cozy and beautiful, is a foreshadowing of our long home.  This includes the pleasures of our senses: delicious foods well-prepared and lovingly garnished; good drink (including spirits); the warmth of a fire; lovely decorations; good music; the enjoyment of good company.  In these United States, founded on Puritan ethics, even Catholics have picked up by osmosis the classic abhorrence of the physical world and its enjoyment: some traditionalist Catholics devote a lot of time to preaching the evils of certain holidays like Halloween.  But God made us to interact with the world, and even with Him, via our senses, and so even though these can be abused, like all things, they cannot be evil in themselves.  The joys of the holidays are meant to encourage us in the midst of a fallen world, with the hope of joys that will never end, and that will be ours if we remain faithful.
The second realization was that the world may be able to make heaven less visible to us, but it cannot do away with the reality of heaven.  Taking away the hope of heaven is precisely what the devil and his human minions have set out to do in this campaign to deprive us of holidays and holy days.  They hate the joys in which they do not share because they do not love; they hate the hope of heaven, of which they despair because they think there is no heaven.  They hate the people who possess these things, and seek to force upon them the inordinate fear of death and the horror of eternity that seizes them because they are slaves to vice.  Most of all, they hate God.  But even if they were to succeed in stamping out every vestige of celebration of Easter and Christmas, they cannot stamp out the truths they celebrate.  They cannot eliminate heaven.
So, no matter what we see on the news (which we should probably stop watching for the sake of our sanity), and no matter what fresh abuses our Masters heap upon us, we should not allow ourselves to be overcome by gloom and doom and give up on the holidays.  We should indeed celebrate them as joyfully as we can, as acts of hope in the God Who has promised us deliverance from our tribulations, and who will cause all our sorrows to be swallowed up in the happiness with Him that will never end.
Posted by Anita Moore at 18:06