A Timely and Outstanding Read: Blessed Charles of Austria 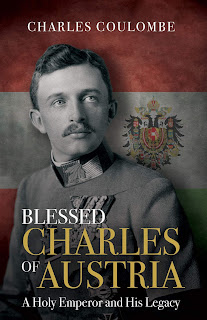 Charles Coulombe is a Catholic author, historian, monarchist and podcaster whose wit, humor and joy are threads of gold in the otherwise almost uniformly dark gray tapestry of current events.  I recently discovered him in a Taylor Marshall interview about his latest book, Blessed Charles of Austria: A Holy Emperor and His Legacy.  Intrigued, I forthwith (a) started following his podcasts, and (b) ordered the book and read it.
Like most books, this one is not without its flaws.  However, in this case, these are minor issues.  Overall, Mr. Coulombe does a very good job of laying out the history and traditions that ultimately brought forth Bl. Charles, of setting his life within the context of that history, and within the context of his Catholic faith.  In our utilitarian age, when many dismiss as mere pointless and unnecessary pageantry the rituals and liturgies of kingship, Mr. Coulombe demonstrates how meaningful and necessary they in fact are, how they formed Bl. Charles, and how seriously Bl. Charles took them as his pledge of faithfulness as Emperor.

Most of all, this book has touched my beady-black heart.  St. Therese of Lisieux, recounting the dream that made real to her the Communion of Saints, said that those in heaven love us and look after us as their own children, even when we never pray to them, even when we do not know who they are. I feel that through this book, Bl. Charles has reached out to me, introducing himself to me and offering to help me as I work out my salvation in fear and trembling. Probably he has been helping me all my life without my knowing it.

As I read the account of Bl. Charles’ prayers for divine aid in ruling, his sacrifices for his subjects, his strivings on their behalf, and his attempts to regain his throne, not because he was hungry for power but in fulfillment of his kingly oaths, I pondered the question why God seemed to allow his prayers and his efforts to be so often thwarted. Perhaps the answer is that the failures were God’s judgment, not on Bl. Charles, whom He ultimately rescued from this vale of tears, but on his ungrateful and undeserving subjects, and on a world that had given itself over to godlessness.  What a terrible thing to have God leave us to our own devices. Through the intercession of Bl. Charles, may He soon rescue us from the troubles we have created for ourselves.