The Deep Relevance of the Traditional Mass

For decades, we have been subjected to endless drivel about the need to make the Catholic faith, and the Mass, "relevant" to the needs of modern man.  What's stupid about this is that, first of all, truth is always relevant, and attempts to spice it up and repackage it only manage to obscure its substance.  Secondly, if we pay attention, we find that both the faith and its expression in the Mass -- particularly the traditional Mass -- are relevant even to the details of our peculiar circumstances at any given time.

I think it's a good practice to prepare for Mass by reading the propers beforehand.  Sunday after Sunday, I am struck by how the propers for that day seem to be speaking directly to current events and circumstances.  Sunday after Sunday, (a) we get something we need to hear in our particular situation, and (b) the Church is praying for the very things we need to be praying for in our particular circumstances. 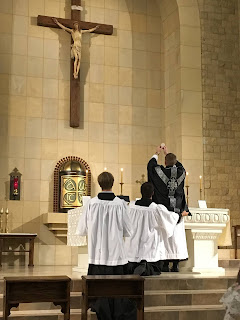 Tomorrow is the 23d Sunday after Pentecost.  The Introit is something we need to hear in the midst of the active coup that is going on in our country right now.  It contains both consolations and marching orders:

The Lord saith: I think thoughts of peace, and not of affliction: you shall call upon Me, and I will hear you; and I will bring back your captivity from all places.

If we call on Him with a repentant heart, He will hear us, and, when the time is right, even deliver us from the troubles we have brought upon ourselves.  Remember His promise in Psalm 106:

Such as sat in darkness and in the shadow of death: bound in want and in iron.  Because they had exasperated the words of God: and provoked the counsel of the Most High: and their heart was humbled with labors: they were weakened, and there was none to help them.  Then they cried to the Lord in their affliction: and He delivered them out of their distresses.  And He brought them out of darkness, and the shadow of death; and broke their bonds in sunder....He took them out of the way of their iniquity: for they were brought low for their injustices.

In tomorrow's Collect, the Church prays:

O Lord, we beseech Thee, absolve Thy people from their offenses, that through Thy bountiful goodness, we may be freed from the bonds of those sins, which by frailty we have committed.

And in the Postcommunion, she prays:

O God almighty, we beseech Thee, do not leave to succumb to human dangers those who from Thee have been the happiness of being partakers of the divine nature.

The propers of the Mass are not decided upon on an ad hoc basis: every 23d Sunday after Pentecost, year after year, they are the same.  Yet they always have particular meaning for us year after year, and in them, the Church prays for precisely what we need at that given moment.

Many of the prayers of the traditional Mass do not survive intact in the new Mass.  Thank God that, when revolution struck the Church, there were churchmen who took care, even at great personal cost, to insure that the traditional Mass survived, so that, at least in some churches, prayers were being raised for those particular things we most need in our times.