To Oakland and Back 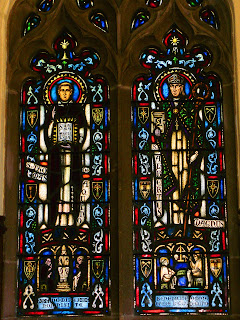 This last weekend, I traveled with the founder of my lay Dominican chapter, John Keenan, and The Redoubtable Marcus Magnus to St. Albert's Priory in Oakland, California for the annual Lay Dominican Provincial Council meeting.  Others elsewhere will talk about the substance of the meeting; I'd prefer to focus here on the periphery.  The sum and substance: the weather was fine; the priory was as welcoming as ever; the food and the company were top-notch; and there were no riots going on this year, like there were at the time of the last LPC meeting.

Just to avoid ending on a sour note, let me start with something that, for some reason, we just had to see while we were there -- kind of like a sore in your mouth that you just have to keep touching with your tongue, even though you know it's going to hurt.  Behold the Taj Mahony's prime California competitor for the title of World's Ugliest Cathedral: Oakland's Cathedral of Christ the Light.  I feel sorry for the worthy bishop of Oakland, +Salvatore Cordileone, for having such a...cathedral.  The two tiny figures near the front entrance are Mark and John, probably gaping in disbelief. 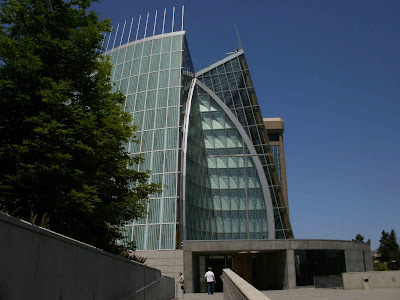 This is the sanctuary.  What looks like scrap metal coming out of the walls on either side is actually the pipe organ.  I guess I should at least be glad there is a pipe organ present in the building.  The giant Buddha-looking thing in the middle is an image of Christ made by lasers.  There is an actual crucifix to the left of the altar. To the right of the altar sits the bishop's chair.  This is somewhat an odd view, because people were gathering for Mass and I had to be somewhat discreet about taking pictures.  But then again, quite honestly, the view is odd from any angle. 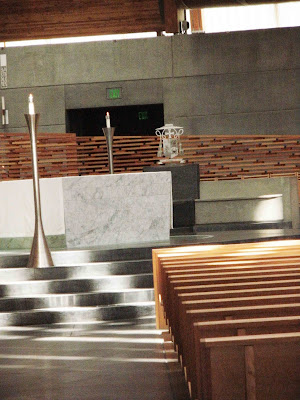 The rectangle that appears to be in cross-hairs is -- I think -- the tabernacle.  At least it is front and center. 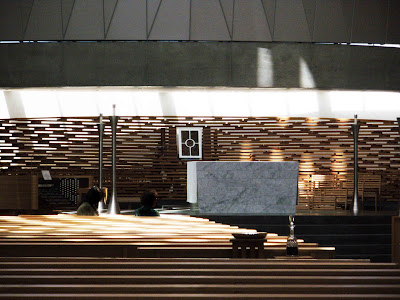 No, you are not inside a concrete bunker on the Maginot Line, or one of Rommel's pill boxes on the beach at Normandy.  This is supposed to be a Catholic cathedral.  Those little squares along the wall are meant to be Stations of the Cross.  As I went through this place, I kept thinking of the line I read years ago in one of P.J. O'Roarke's descriptions of residential blocks in then-East Germany: "Commies love concrete." 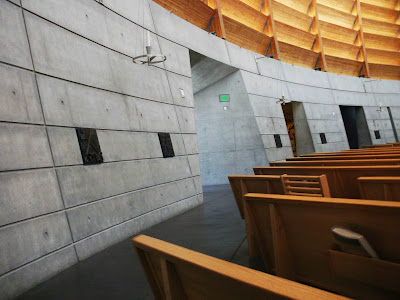 These stacks of two-by-fours are -- believe it or not -- the confessional.  It is in a recessed yet open space, with no privacy, no anonymity, and no apparent means of muffling sound. 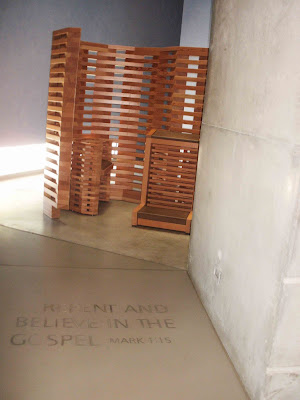 The ceiling basically reflects the shape of the building: the Eye of Sauron meets the Superdome. 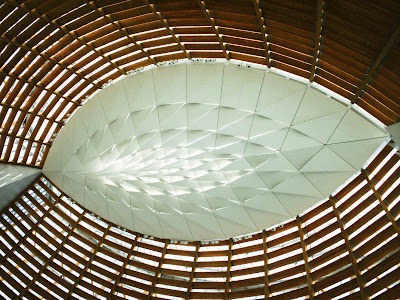 Yet the hideous, stark sterility of cathedrals that reflect the Golden Age of Contraception rather than the Catholic faith is not all there is in Oakland.  Fortunately, there is still St. Albert's Priory, the lovely Dominican house of studies on Birch Court in one of the older neighborhoods in the city.

This is a view of the cloister at St. Albert's.  St. Dominic stands in the middle, surrounded by his fish pond.  In the background is the chapel.  I felt kind of badly about how noisy we lay Dominicans were being in the cloister, until I saw a group of friars come out of the house talking and carrying on every bit as loudly as we were. 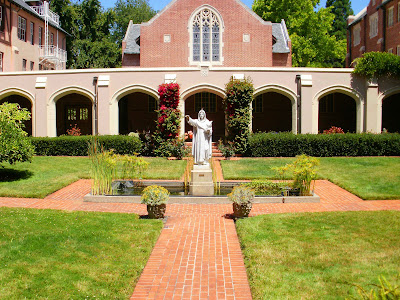 Here is one of the cloister koi, with a number of small companions.  At the time of day I shot this picture, most of the fish were gathered under the shade of the statue.  If you catch them at the right time, the fish will all stick their heads out of the water and open wide, waiting for food. 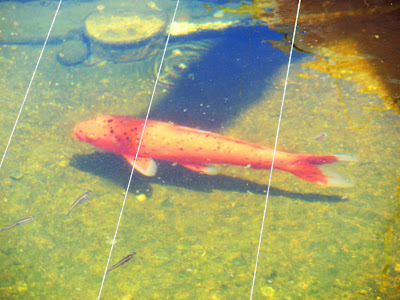 This tree that grows in the corner of the cloister (in the direction St. Dominic is pointing) is an example of the lush flowers that grow almost wild all over Oakland's residential neighborhoods.  We do not have anything like it here in Boise.  The flowers remind me of Gabriel's trumpet. 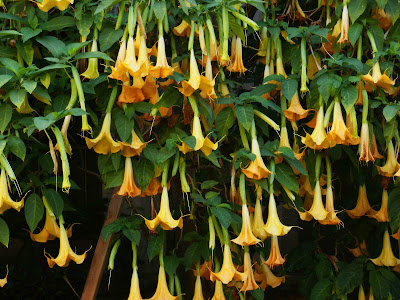 Here is one of the cloister turtles, sunning himself in the grass.  (I only assume it's a "he."  I really don't know how to tell.) 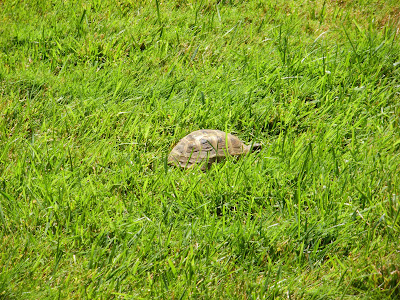 Cloister walk to the main chapel. 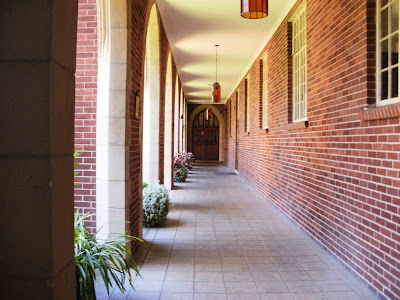 Among the highlights of a visit to St. Albert's are Mass and Divine Office with the friars.  Chant is an integral part of Dominican spirituality, and so the daily Offices are chanted.  This is the main chapel of St. Albert's, with choir stalls instead of pews. 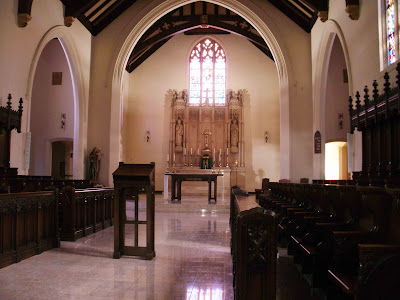 The sable and argent Dominican shield, with cross fleury, in the floor at the rear of the nave. 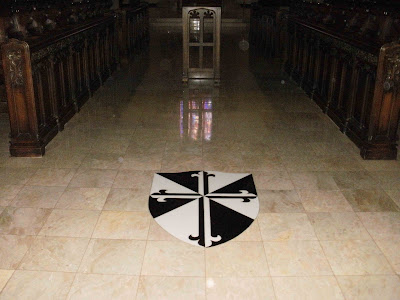 The high altar, with statues of St. Dominic and St. Albertus Magnus. 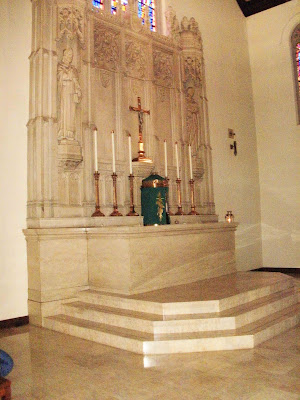 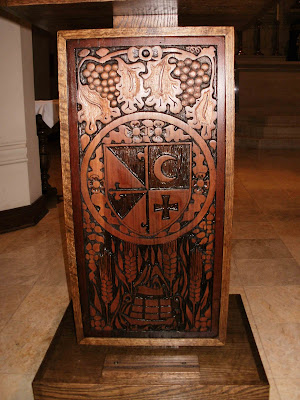 Good food and good conversation are also a highlight of visits with other lay Dominicans at St. Albert's.  Good, plain food is standard fare at the priory.  This is part of the refectory.  Lectio divina during meals is a long-standing custom in the Order, and this is the dais from which spiritual writings are read.  This was not done while we were there. 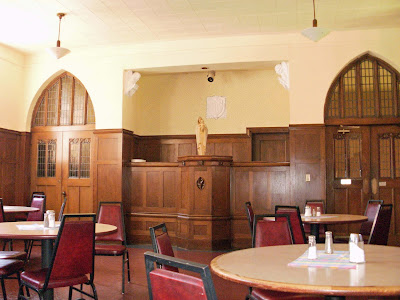 Before we left, we made sure to pay a visit to the grave of Mark's father, Bill, who passed away this past February.  It was difficult to find the grave, whose stone is not yet ready for placement, but Mark finally found the temporary marker.  Bill lies at the top of a hill that overlooks the Bay, in one of the highest points in the cemetery.  This is a partial view from there. 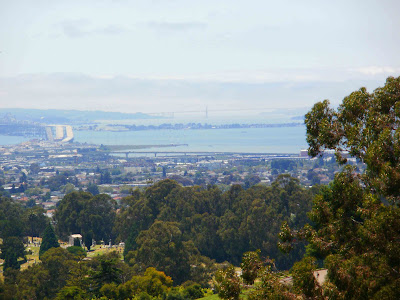 Although I snapped shots of the ugliest thing in Oakland (see above), I did not photograph some other, depressing reminders of why I left California, such as the slummy, trash-blown parts of town, multi-story jails, wandering packs of kids with pants down below sea level, aggressive panhandlers and graffiti-infested buildings and vehicles -- not to mention all the gay pride crap.  We do not have these things to as great an extent at home.  It was good to come back to the (relative) sanity of Boise.
Posted by Anita Moore at 16:18