Although we celebrate the Feast of St. Thomas More on June 22, together with his friend and fellow martyr, St. John Fisher, it was actually 476 years ago today that our saint mounted the scaffold.  About his execution date, the saint wrote in his last letter to his daughter, Margaret: "I would be sorry if it should be any longer than to-morrow, for it is St. Thomas's even, and the utas of St. Peter; and therefore, to-morrow long I to go to God. It were a day very meet and convenient for me."

Some photos to celebrate Thomas More's birthday in heaven: 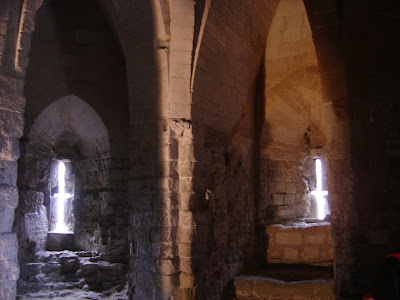 St. Thomas More's cell in the Tower of London. From these arrow slits, the saint and his daughter witnessed the first of the Carthusian Martyrs being led out to Tyburn Tree to be hanged, drawn and quartered. 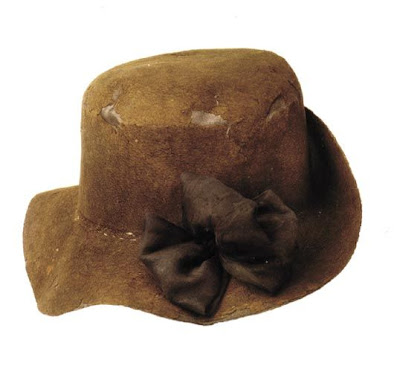 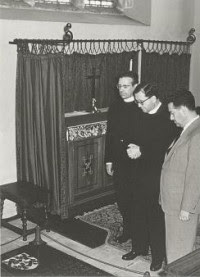 A saint pays homage to a saint. St. Josemaria Escriva had a great devotion to St. Thomas More. Here he is at St. Dunstan's, Canterbury, before the Roper vault, the probable resting place of St. Thomas' head.

Margaret's in-laws, the Ropers, had a family vault at St. Dunstan's, which is now under the care of the Church of England.  In 1978, the Roper vault was opened for an archaeological survey and partial excavation.  The vault has since been sealed.  Margaret, who died in 1544, was believed to have been buried originally in Chelsea, with the head of her father in her arms, and then re-interred in St. Dunstan's after the death of her husband, William Roper, in 1578.  This photo shows the niche containing a lead box, which in turn contains the decomposing remains of a human skull believed to be that of Thomas More.  In an article which appeared in the Moreana journal in 1979, Hugh O. Albin describes the medical assessment of the skull in the niche:

Dr. P.H. Garrard was only allowed an external examination of the lead container set in a niche in the north wall of the Roper vault. The contents are visible at about one foot distance from an iron grille set in the wall. The container is about one foot cube : a hole cut in it gives a partial view.... Dr. Garrard recognizes the fragments as being bone from a human skull, namely:

(1) A small fragment of the vault of the skull about an inch across.
(2) The hard palate.
(3) Part of the maxilla next to it but separated, with one empty tooth socket.
(4) What appeared to be part of the thin boned structures in the posterior part of the nasal cavity.

Most of the skull has degenerated into a number of dark brown crumbling pieces and the floor of the container is covered with powdery and granular material. Some of the pieces are whitened by a deposit which is probably a salt of lead. The empty tooth socket , showing no signs of healing, implies loss of a tooth after death due to natural processes. The advanced degree of decomposition is due, Dr. Garrard suggests, to exposure to air, while the other bones in the vault were covered in earth.

As for the rest of St. Thomas' body, it was buried in a mass grave at St. Peter ad Vincula (St. Peter in Chains), the parish church of the Tower of London.  Excavations made during the latter half of the 19th century failed to result in the identification of the saint's remains, which were mixed up with those of so many others.

Such is the stuff of St. Thomas More in this world -- but only in this world: anonymous, lost, ravaged by decay, yet certainly destined to rise again in glory at the sounding of the Last Trumpet.
Posted by Anita Moore at 19:42