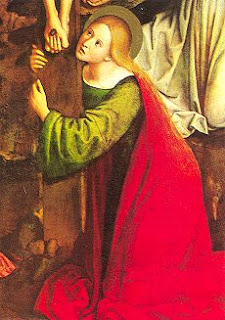 A few months ago, in this space, I lamented the miserly spirit and false love of poverty within the Church that has deprived us of the treasures, great and small, that had hitherto nurtured many generations of Catholics.  Today, a wonderful follow-up from a parish that enjoys the patronage of today's saint, whose popularity once rivaled that of the Mother of God herself.  Fr. Ray Blake publishes his beautiful homily for the feast of Mary Magdalene, celebrated for her extravagantly generous love for Our Lord -- including a bit that was not preached but which deserves to be trumpeted from the rooftops:

How interesting that the response of the Counter Reformation to the pale, cold, tight-lipped parsimony of the Protestant Reformation was the exuberance of the Baroque. It is the theology of the Incarnation, of the Eucharist, of the essential goodness of creation, of God's presence in the material, all of those things Protestantism tended to reject, expressed in art. Pattern on pattern, art on art, craft on craft, colour on colour, voice on voice, it is luxury and generosity. The white wash of the Reformers was fought by marble and gilding, carpet and textile. The preaching gown, countered with lace and silk, the broken statue, the defaced wall painted with the exuberance of Titian and Caravaggio, the lost churches and cathedrals of the North with the Michaelangelo and Bramante temples in the South. The despoiled monasteries and silenced cloisters were replaced by the new Orders, the enthusiasm and generosity of the young followers of Neri, Loyola and de Lellis.

So today on our sacred Feast day, where are the fountains flowing with wine, the trumpets, the drums, the canons? Where are the golden cherubim, the flowers to cover the floor and perfume the air?  Where are the choirs and orchestras, the dignitaries, the roasting oxen, the partying, the processions, the flags, the street shrines, the banners hanging from windows, the houses decked for the festival? Where are the fireworks?

Where are the new clothes for the poor, where is their food, where are the enemies being reconciled and the stranger welcomed? Where are the keys of the prison and [gaol]? Where the medicines for the sick? Where are the bright faced young men and women willing to go to the ends of the earth or suffer martyrdom for love of Christ? Where were the streams of penitents earnestly waiting for mercy, having spent sad nights and bitter days with already returned penitents  preparing for this day of days?

Where the lavish gift and generous hearts?

St. Mary Magdalene, it was you whom the Lord praised for breaking a costly jar of nard over His head, and not the Iscariot, who rebuked your extravagance.  Intercede for the Church Militant, infected with the world's false asceticism that quenches the Spirit, and obtain for her the widespread revival of true charity and generosity.  Amen.
Posted by Anita Moore at 18:09