The Joys of Tradition and Other Reflections 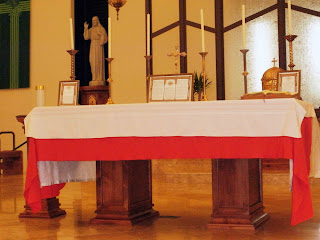 This is the altar at Our Lady of the Valley Catholic Church in Caldwell, Idaho, set up for sung Mass in the Extraordinary Form last Friday, July 15th.  It was a votive Mass in honor of the Precious Blood of Jesus, celebrated by -- who else? -- the inimitable and irrepressible Fr. Andrew Szymakowski of the Baker Diocese, and attended by the Bl. Margaret of Castello chapter and a number of visitors.  This was Father's next-to-last visit to the Dominicans before going to Catholic U. in D.C. to get his degree in canon law.

This was an historic occasion: the first Mass in the Extraordinary Form ever offered in this parish.  I wish I could have snapped some shots during Mass, but I had to lead the schola.  I was terrified of being responsible for knowing when to begin each of the propers, as this was only my fifth ever Missa Cantata, but I have it on the best possible authority that I did not err in that regard. The propers for the feast of the Precious Blood are, hands down, the hardest music our little schola has ever tackled up to now; everything else should come as child's play after this.

I wish everybody who hungers after reverent, traditional Catholic worship and solid, forthright, undiluted Catholic preaching could have been there.   Would that more people had heard Father's homily on the Eucharist, the need for reverence for the Blessed Sacrament, the need for proper dispositions when approaching the Eucharist, and the capital importance of confession and not receiving Holy Communion in a state of mortal sin.  Someone commented that we hadn't heard the words "mortal sin" from the pulpit as many times in the last year as we did in just that single homily.

There is a common misconception that those who love Catholic tradition are dour, gloomy and joyless.  It is indeed tough, after tasting the beauty of the Tridentine Mass, and drinking at the fountain of sacred chant and polyphony, to be cheerful while listening to "Gather Us In" and dodging gropey little old ladies during the sign of peace at the Masses we usually attend; and some of us are not as good as we should be at concealing our abhorrence.  But the absence of the happy and clappy, or of a taste for the same, is not a sure-fire sign of misery, any more than the presence of these things infallibly indicates authentic joy.

For proof of this, one need look no farther than the example of Friday's gathering, and particularly the person of the worthy young priest of the old school who traveled so far to give us this special occasion.  I suspect that people who don't like unalloyed Catholicism -- and there are many -- have listened to Fr. Andrew's no-holds-barred preaching, or run afoul of his charitable yet uncompromising exercise of priestly authority, and written him off as a stilted, dour, severe, puritanical, Latin-spewing, Prussian-style killjoy.  Such a judgment would be as wrong as it is rash and unjust.  After Mass, Fr. Andrew and the Dominicans went to a local restaurant and had a laugh-fest that brought the house down -- all without drugs, alcohol, or raunchy humor.  Father himself laughed until his stomach hurt; then he laughed some more.  Nor was this a one-off: casting out doom and gloom is part of Father's stock in trade.  I am sorry for all those who have cut themselves off from ever seeing that side of him, or who would fail to appreciate it even if they did see it.

And I am sorry that the attempt was made by some in the Church to cut Catholics off from the joy of Catholic worship as it has been performed for so many centuries.  The Mass is truly the Passion and Death of Christ, the Sacrifice of Calvary re-presented on the altar in an unbloody manner; it is also a window on eternity, an image on earth of the worship that is offered forever in heaven, where every tear is wiped away, and death and mourning and crying are no more.  I have said before in this space that the Mass of tradition communicates truths of the faith more clearly than what we have been used to seeing over the last 40 years.  The joy of heaven is one of these truths.  Even if we are not immediately conscious of it during Mass, it bears its fruits.
Posted by Anita Moore at 21:51