Dashing Ourselves on the Iceberg of Law, Order and Security 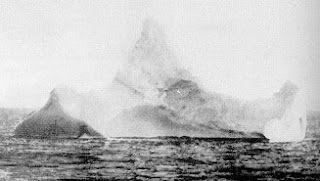 As a denizen of the criminal justice system, I can't help reflecting constantly on how much charity has cooled in the world.  It is not merely the crimes that people commit against one another that inspire these reflections.  More frequently, they are inspired by that which is done in the name of law and order.  We are now so enmeshed in a thicket of picky laws rigidly enforced that it is becoming increasingly difficult to go about one's business without running afoul of the authorities; and when we do, we suffer penalties out of all proportion to the gravity of the offense.  We put up with all this because we are led to believe that it is necessary, for the good of ourselves and of society at large.

My trip to Oakland a couple of weekends ago provided me with an especially sobering occasion to reflect upon the retreat of charity from the world, and how "necessity" provides us with excuses for driving it away.  At the Boise Airport, after having been divested of my shoes, my purse, and everything out of my pockets, I committed the unforgivable crime of not unpacking my liquid toiletry items from my carry-on suitcase before putting it through the X-ray machine.  A rubber-gloved TSA goon pawed through my personal items and held them up for public view.  While another set of goons in the background selected cute young girls out of the crowd of passengers to put through the naked scanner, I received a lecture about exceeding my ounce limitations for liquid shower soap.  As he shoved my soap, shampoo and toothpaste into a ziplock bag, the TSA goon sought to assure me of the indispensability of this degrading process.  "All this is necessary," he said, the corner of his mouth upturned.

Yeah?  When human beings are herded like cattle; made to take off their shoes and belts; groped or forced to stand naked (in effect) in front of an electronic scanner; subjected to a myriad of petty humiliations; crammed into a confined and cramped space for the duration of the flight, during which they are bossed around and generally treated like infants pursuant to federal law -- and are charged exorbitant rates for the privilege -- it is difficult, if not impossible to remember that we are incarnate spirits, made in the image and likeness of God.  Does this reflect a civilized order?  And if civilization is to collapse, what exactly are we defending that is worth all this?

Just as we are inclined to purchase peace at any price (and history is full of examples), it appears that we have allowed ourselves to be reduced to saving our hides at any price, as if there is nothing in this world or the next that is worse than death.  We will jettison every virtue, from modesty to charity, in order to stay alive; and in the process, we become slaves.  To quote a line from a famous Charlton Heston movie: is life in bondage better than death?

We must remember that we are not put on this earth for the sole purpose of prolonging our time on it.  Our overriding duty is to view this life in the light of eternity, and act accordingly.  So far from providing us a way of running from our problems, including threats to our security -- viewing the world in the light of eternity does not require us to jettison common sense -- this would actually provide us with the only really worthwhile solution.
Posted by Anita Moore at 21:42