We have had three -- count 'em! -- THREE Dominican feasts/memorials in a row this week! This week's gallery of distinguished children of St. Dominic: 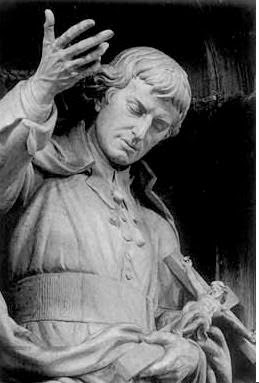 St. Louis Marie de Montfort (1673-1716), Dominican tertiary and, like St. Dominic a great apostle of the Rosary and of the Blessed Mother. His two greatest works are The Secret of the Rosary and True Devotion to Mary. His great contribution to the faith is the total consecration of oneself to the Blessed Mother as the greatest act of devotion to God and the surest path to Heaven. All the great saints, he points out, have walked this path; it is the surest, because Mary keeps nothing for herself, but gives to God everything that is offered her -- and she knows how to give gifts to God free of imperfections, and in the manner that He will find most pleasing. St. Louis' writings are clear, straighforward, engaging and easy to understand. The cause to declare St. Louis de Montfort a Doctor of the Church is underway; he would be the fourth Dominican to be so honored (the tenth, really, if you count St. Thomas Aquinas in all his fullness). 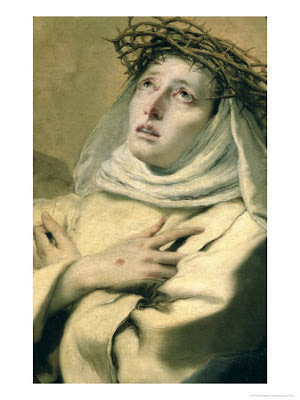 St. Catherine of Siena (1347-1380), Dominican tertiary and Doctor of the Church. She was the 23d of 25 children; she had a twin who died at birth. She was a mystic and stigmatist. When there were three claimants to the Throne of Peter, Catherine adhered to the true Pope, who was then at Avignon, and convinced him to return his administration to Rome. She left a great body of literature, of which the greatest work is the Dialogue of Divine Providence. 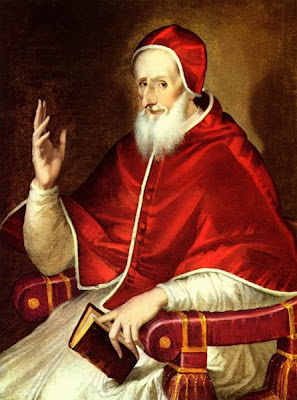 Pope St. Pius V (1504-1572), Pope and Dominican. The Council of Trent, convened in response to the Protestant break with the Church, ended just three years before Pius ascended the Throne of Peter; upon his election as Pope, it became his job to enact the Council's reforms. Under his leadership, a new breviary and missal were published; his great legacy was the Catechism of the Council of Trent, whose value five hundred years have not diminished. A small yet highly visible legacy: it was Pius V who began the papal tradition of wearing white, owing to his white Dominican habit.
Posted by Anita Moore at 19:27