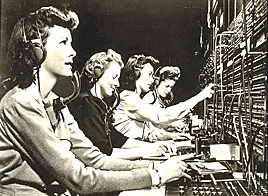 Recent events compel me to say a few words about telemarketers and telemarketing, a job that I myself have actually done, and which I rank as one of the Two Most Repellent Jobs I Have Ever Held (it runs neck-and-neck with a job I once had pulling weeds at a long-neglected, dreadfully overgrown condo complex). Herewith some helpful facts and hints about telemarketers for the targets of annoying sales calls:
1. For all you business owners out there: if you're really serious about putting the kibosh on all sales calls for all time, quit advertising your business. Sales calls are part of the price you pay for publicity. Also, next time you go to a sales or trade convention, don't sign up to get free information about anything. Last time you went to the Acme Annual Shower Curtain Ring Sales Convention in Vegas, you took a few too many spins at the roulette wheel, downed a few too many highballs, and then signed your name to a few too many lists. That may be a huge factor in why you are now being besieged by telemarketers trying to get you to sign up for a free subscription to a trade magazine. Booze and mailing lists just don't mix.

2. That pestiferous person on the other end of the phone line, trying to push something on you that you don't need, or pester you with survey questions about your medical conditions, is not annoying you for his health. It is his job -- possibly the only crummy job he could get at that particular moment in history. Some telemarketers have been in the business for years, and love it. You mustn't grudge them that, since it enables them to earn their keep and get through their workdays in peace -- a considerable benefit not only to them, but also to their families and friends and everybody who has to put up with them in person. Others, however, are just struggling, and would jump at the chance to shovel out stables, scrub floors with a toothbrush, clean bedpans, or do just about anything else besides telemarketing. Telemarketers' time is highly regimented and closely monitored by computer: they get dinged for being five minutes late to work; they get only 20 minutes for lunch; they can spend a total of no more than 12 minutes a day on bathroom and drink breaks; and they put up with all this in exchange for peanuts. That person you are about to tell to go take a flying leap may be a lifelong housewife whose philandering husband suddenly left her destitute, or a young widowed mother, or just a kid trying to earn his way through school. Your real quarrel is not with the working slob making the sales call, but with the company that hired the telemarketing firm he works for to push the magazines or take the surveys. Or maybe, the person you really should be mad at is yourself -- see Point No. 1 above.

3. The telemarketer has no control over whom he calls, and has no way of knowing that you have been called three or four times today already. The calls are all placed by computers, into which have been fed your contact information, which was provided by the telemarketing company's client, which in turn came from -- well, you (see again Point No. 1 above). The telemarketer just sits in front of a computer screen, waiting for the calls to come up. The calls are sent to whichever telemarketers are logged in and have their phones on: they must be logged in in order to get paid, and they are not allowed to turn their phones off without a good reason. If you keep getting unwanted calls, it is not the fault of the person on the other end of the line.

5. If you want the telemarketers to stop calling you, you can (a) put yourself on the National Do Not Call Registry; (b) sign up for the free subscriptions the telemarketers are hawking; or (c) ask them to stop calling you, at which point they will put you on the do-not-call list (which may or may not actually end the calls immediately, depending on the company's system and procedures). Don't just tell them you're unavailable or too busy, because then you won't be taken off the call list. Just hanging up on them is also not a sure-fire way of stopping the calls. Threatening to press charges will have no effect on the telemarketer, who is not ultimately responsible for your being on the call list in the first place (see again Point No. 1).

Telemarketing is a plague and a nuisance, a sure sign that we have not, and will not, achieve Paradise on Earth. The only good thing that can be said about it is that it at least provides a sort of financial lean-to for some who otherwise would find no shelter at all against the economic storms that batter their lives. Telemarketers are merely annoying, not sinful. Cut them some slack.