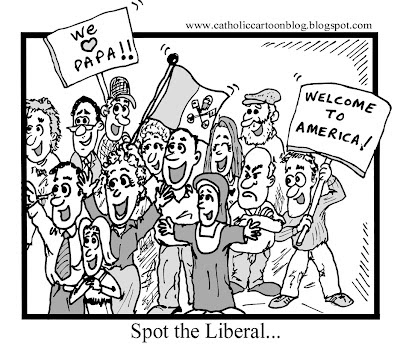 And Saul said to David: Thou art not able to withstand this Philistine, nor to fight against him: for thou art but a boy, but he is a warrior from his youth. And David said to Saul: Thy servant kept his father's sheep, and there came a lion, or a bear, and took a ram out of the midst of the flock: And I pursued after them, and struck them, and delivered it out of their mouth: and they rose up against me, and I caught them by the throat, and I strangled and killed them. For I thy servant have killed both a lion and a bear: and this uncircumcised Philistine shall be also as one of them.

1 Kings 17:33-36
Could this be the problem the liberals have with Pope Benedict -- and have in fact had with him since he was just plain Cardinal Ratzinger: that he is a slayer of lions and bears and uncircumcised Philistines? Are the liberals' leading lights in fact the lambs and sheep they hold themselves out to be?

Father Down Under, by the way, at Homilies and Reflections from Australia, has some very good thoughts about warriors for peace; this is a contradiction only to those whose idea of "peace" is the absence of opposition to evil.