Hold It Right There! 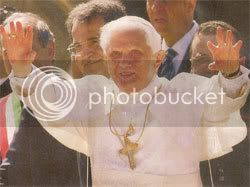 Ole Q over at L.A. Catholic reported the other day on the twitter the L.A. Times sent forth against the Holy Father's roar on April 15th, criticizing his past public speaking performances and giving him tips on how to avoid future blunders, like, say, oh, preaching the Gospel to every nation, and baptizing them in the name of the Father, and of the Son, and of the Holy Spirit.

The perfect response to this effrontery was provided a couple of days earlier by Archbishop Pietro Sambi, Apostolic Nuncio to the United States, in a call-in interview program with Raymond Arroyo. In response to a caller who wanted to know if the Pope was going to "take advantage" of his visit, and what he was going to say about the war in Iraq, the good Archbishop said:

If I may instruct the listener: Please don't ask-a the Pope-a to say what you want heema to say, but listen to what the Pope-a have-a to say.

So there, L.A. Times. Put that in your pipes and smoke it. Take the crack out first.