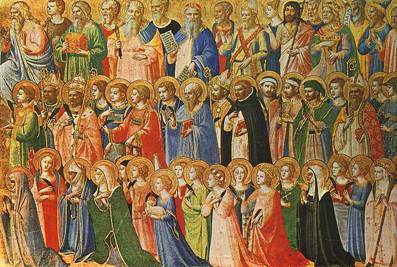 The Communion of Saints is the Christian dogma of the spiritual solidarity that binds the Church Triumphant (the saints in Heaven), the Church Militant (Christians on earth) and the Church Suffering (the holy souls in Purgatory) in the Body Christ. Since not even death breaks this union in Christ, we are able to pray to the saints (i.e., ask them for their aid and intercession); we are able to pray for the relief of the souls in Purgatory; and God makes it possible for the Saints in Heaven to hear our prayers and to join theirs with ours. We invoke the saints, not to worship them, but to secure their aid and intercession before God's throne. It is the same as asking a friend on earth to pray for us; but when we pray to a saint, we are asking a friend who already stands before God's throne to exercise his influence with God on our behalf.

Everyone who makes it into Heaven is a saint. The world is full of invisible saints in the making, and heaven is full of saints whose memory on earth is now forgotten; but there are those that the Church holds up to us as examples to imitate, as well as friends to intercede for us in our troubles. Different saints have different areas of "expertise" or special concern, based on their life's work on earth, or extraordinary events or circumstances surrounding them. For example, that roaring lion of two-fisted cool, St. Thomas More, was a lawyer and statesman; he is therefore the patron of lawyers and statesmen. St. Saint Thérèse of Lisieux had a special love for missionaries, though she lived in a cloister; therefore, she is a patroness of missionaries. St. Dismas, the Good Thief whom Jesus Himself canonized as he hung next to Him on the cross, is the patron of condemned criminals.

There is a patron saint for just about any conceivable occupation, pursuit or concern, and against just about every disaster under the sun. Herewith some very interesting ones:

St. Hubert. The patron saint of hunters. St. Hubert was born in Holland and lived from about the middle of the 7th century to the first quarter of the 8th. A dissolute young nobleman, he was out hunting a stag on Good Friday -- a huge no-no -- when suddenly he saw a vision of a crucifix between the stag's antlers, and a voice told him that if he didn't straighten up, he would soon go off to Hell. He straightened up; and when his wife died, he renounced all his worldly goods and became a priest, then a bishop.

St. Genesius of Rome. The patron saint of actors. Genesius had a conversion experience not unlike that of St. Paul. While he was on stage playing a role in mockery of Christian baptism, God knocked him on his ass. He arose converted, and refused to go through with the part any longer. He suffered martyrdom during the persecutions of Diocletian.

St. Dymphna. The patroness against mental illness. St. Dymphna's mother died when she was a teenager. Her father, a pagan Irish chieftain, driven mad by grief, made advances on her, which she refused. She fled, and he pursued her; when he caught up with her, and she continued to resist his advances, he swept her head off with a sword. Miraculous healings of the insane and mentally ill have taken place on the spot where she died.

For more on the saints and their special areas of expertise, check out the Patron Saints Index.
Posted by Anita Moore at 07:44