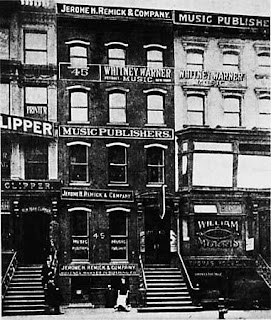 Some Tin Pan Alley hits have had such a profound effect on American culture that they are probably familiar to even the goofiest, most rap-inundated, network-television-soaked kids of today. Even if you don't recognize the names of these songs, you will probably recognize the songs themselves as soon as you hear them. For example:

"Maple Leaf Rag," (1899) by Scott Joplin. This is one of the most famous and recognizable ragtime pieces ever. The rendition linked here was played by Scott Joplin himself.

"The Entertainer" (1902) by Scott Joplin. Probably even more famous than "Maple Leaf Rag." It served as the theme for The Sting in 1973.

"Hello! Ma Baby" (1899) by Joseph Howard and Ida Emerson. Anybody who grew up watching Warner Bros. cartoons on Saturday mornings has heard the chorus to this one. This recording was performed by Arthur Collins in 1899.

"Give My Regards to Broadway" (1904) by George M. Cohan. The linked performance is by James Cagney in Yankee Doodle Dandy (1942).

"Down by the Old Mill Stream" (1911) by Tell Taylor. Most people who are familiar with this song know the chorus and not the verses. It goes against the grain, but I have linked to the Chipmunks' performance of this tune.

"Take Me Out to the Ball Game" (1908) by Jack Norworth (lyrics) and Albert von Tilzer (music). The composers had never attended a ball game, and would not do so for several decades. The recording was made in 1908 by Edwin Meeker.

"Ain't She Sweet" (1927) by Milton Ager and Jack Yellen. This song was written for Milton Ager's daughter, who was then two years old. Jack Yellen, you may remember, was also the co-composer of "My Yiddishe Momme," which I posted about the other day. The linked performance is by Lillian Roth in 1933.

"Happy Days Are Here Again" (1929), also by Milton Ager (music) and Jack Yellen (lyrics). Unfortunately, this song was hijacked by FDR and the Democrat Party. This rendition was recorded in 1930 by Charles King in the movie Chasing Rainbows.

And last but not least...

"God Bless America" (1918) by Irving Berlin. Berlin made some revisions to the song in 1938, when Kate Smith introduced it during an Armistice Day broadcast. It became her signature song.