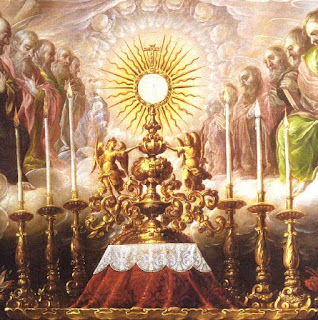 Pope Francis asked that today, in honor of the Solemnity of Corpus Christi, every parish in the world have a Holy Hour of adoration between 17:00-18:00 Rome time.  That was 9:00-10:00 a.m. here in the Mountain time zone, and very conveniently fills up the hour between the first two Sunday Masses at St. John's Cathedral.  The Host, placed in the cathedral's very beautiful, ruby-studded monstrance, was enthroned on the altar, surrounded by candles.  The hour ended with Benediction.  Plenty of Latin was involved.

And, for the first time since I have attended the cathedral parish, silence reigned before Mass.  I am in the habit of arriving early on Sundays to pray the Rosary before Mass; but pretty soon, the cathedral fills up with people yapping and laughing and carrying on and generally behaving as though they were someplace else, until the noise becomes unbearable.  It is especially awful when there is a Baptism between Masses.  Today, however, a very different atmosphere prevailed.  Except for the occasional unavoidable noises, like coughs and sneezes, the cathedral was quiet.  People were on their knees, praying.  Some sat with prayer books or devotionals.  People coming in made every effort to do so silently.  If there was anyone there not praying, at least they weren't yakking, either.

It should always be that way inside a church.  It's God's house, and the gate of heaven, and Jesus is always present there in the tabernacle.  Yet sadly, the uproarious din of the Novus Ordo Missae spills over into the hours outside of Mass, so that it's almost never quiet in churches, and hasn't been for a long time in a lot of places.  But the Blessed Sacrament, exposed in the monstrance and enthroned on the altar, makes a palpable difference.  We should have this hour of adoration every Sunday.  If the majority of Catholics -- even the Mass-goers -- no longer believe in the Real Presence, then bring them before their Eucharistic Lord, every Sunday before Mass, where they can have Him right in front of their eyes and be conscious of His presence.  He will take care of the rest.

And I hope Pope Francis makes a habit of calling for worldwide Holy Hours.  This is a perfect use of our media of instantaneous communications.  Imagine a worldwide Holy Hour every month!  If this became a regular event, parishes would have the opportunity to adjust their Sunday Mass schedules if necessary, until Catholics in every parish on earth are kneeling before the Blessed Sacrament at the exact same hour, obtaining graces and blessings for themselves and the whole world.  This could not fail to have its effect.  Perhaps even, in the fullness of time, the conversion of every nation on earth.

In fact, we should write to the Holy Father and ask him.  Those who do not ask, do not receive.  Hopefully, some influential person will join in this petition.
Posted by Anita Moore at 14:22