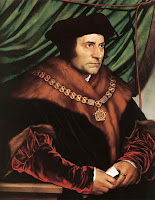 There are times when I can't decide what is more disconcerting: that every man has his price, or that the price is always so low.  Today is the feast of two men -- one a bishop, one a married layman -- who could not be bought at any price.  They lost their heads for it.

Thomas More died because he would not deny the primacy of Peter.  It's important to remember how difficult that must have been in a world where so many churchmen were ready to enter into schism with Henry VIII.  St. Thomas More was neither stupid nor ignorant -- indeed, he was one of the most brilliant men who ever lived -- but the thought of so many in the Church ranged against him must have been frightening.  Was there a chance he was wrong to give up everything and bring poverty on his family?  What if they were right and he was wrong?  If he went willingly to his death for a bad cause, how would he stand in the Supreme Tribunal?

Imagine how daunting the circumstances had to be for St. John Fisher.  If we today are plagued by many bishops who are weak at best and heretical at worst, our age is not unique.  Are we worse off than England during the time of Henry VIII's rebellion?  Only one bishop in England remained true, and that was John Fisher.  Only one cardinal has ever suffered martyrdom, though cardinals wear scarlet precisely as a sign of their willingness to die for Christ: that was John Fisher.

Here is a pair of saints for our time, when the world's hostility toward the Church is again approaching a rolling boil, and we need both wisdom and courage to persevere.