An Open Letter to the Bishops of the United States 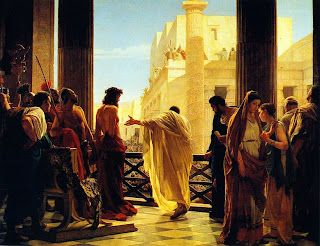 Dear Bishops, Archbishops and Eminences of the Church in the United States:

In 2007, Barack Hussein Obama was elected President.  It was his explicitly stated goal to fundamentally transform this country.  This he has certainly done.  He has nationalized entire industries; increased the national debt to hopelessly out-of-control levels; turned the national security apparatus and the taxing authorities against his political opponents; promoted radical Islam at home and abroad; eviscerated our military;  attacked our right to keep and bear arms; crammed abortion, contraceptives and active homosexuality down our throats; published countless new regulations and executive orders; wrecked our system of checks and balances; sought to destroy our sovereignty via open borders; and made our beloved United States the laughing stock of the world.  Above all, he has declared war on the Catholic Church, and therefore on God.

But what makes it most certain that Obama is targeting the Catholic Church is his army of unfaithful Catholic footsoldiers, many of whom were obviously quite deliberately recruited by him in order to weaken Catholic resolve.  These politicians and bureaucrats quite openly and notoriously join Obama in his opposition to Catholic teaching, to the great scandal of the faithful.  Many more Catholic public figures at various state and local levels who are not directly connected to Obama nevertheless add to the scandal by publicly supporting his agenda.

But what is even more scandalous than all this is the silence of so many bishops in the face of this insouciance.  A few bishops take up their rods and staffs and publicly declare that Catholic politicians who openly support intrinsic evils will not be admitted to Holy Communion.  Most, however, remain silent.  Some allow themselves to be photographed in the act of hobnobbing with openly declared enemies of the Church.  Others go so far as to declare they will not enforce canon law against public sinners, on the grounds that this purportedly makes a political football out of the Eucharist.

Perhaps we should be thankful that some of our shepherds are more enlightened than, say, the authors of Canon 915, and are thus in a position to make up for the deficiencies of the Church's lawmakers.  On the other hand, perhaps the whole idea of refusing to inflict punishments in pursuit of "the law of love, rather than the law of fear" needs to be re-examined in light of the chastisements we are already suffering on its account.

Dear Shepherds, I can tell these erring Catholic public figures how wrong they are until I'm blue in the face; but they will not listen to me, and aren't about to listen to me.  You, on the other hand, have teeth.  Only you can force them to a decision: whether they love God more, or their ideologies and all that goes with them.  Only you can force them to choose: whether to go on being able to receive the Sacraments, or to persist in their obstinacy.  Only you can face them with the stark consequences of their bad choices.

Perhaps, if you do that, they will repent.  Is not the point of punishment to make sinners see the error of their ways and repent?  But as long as you allow them to go on pretending to be Catholics in good standing, all while waging war on the Church, they will see no reason to repent.  When you do not take action, the whole Body of Christ suffers.  How much bad legislation could have been averted, if you had acted to move someone to repent?  How many disastrous Supreme Court decisions might never have been written, had you taken steps to correct your erring sheep?  And we must all live with the effects.  By not punishing the guilty, you punish the innocent; and then, how are you to escape your own punishment?

Dear Bishops, time is running out.  Events are moving very rapidly.  Every day brings fresh disasters; the blows rain down on us with ever-increasing ferocity.  There is little left now of the America we grew up in, and of the freedoms we pray every Sunday for our politicians to safeguard.  You, dear Bishops, also bear a responsibility for safeguarding our freedom.  It is time, and past time, to drive the wolves out of the fold, and to preach repentance and conversion, without which we will never get our country back.

And when the United States is gone beyond recall, where will we go then to find religious freedom?

As ever, your obedient servant.
Posted by Anita Moore at 16:34