On May 20th, the annular eclipse that swept across the western United States was visible from the Boise area as a partial eclipse.  I decided to grab a sandwich, a diet Coke, and go out somewhere where I'd have a good view and investigate.

Tension heightened as the day progressed because of the persistent presence of pestiferous clouds.  But as the eclipse began, the clouds actually turned out to be a good thing, making it possible to get a direct (if a little fuzzy) shot of the moon taking a bite out of the sun.  (Note: never look at the sun through the eyepiece of your camera.  My camera doesn't have an eyepiece, but if it did, I wouldn't have looked through it, because that would have been dumb.) 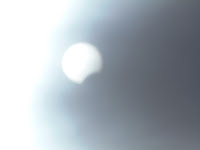 The last time I saw a partial solar eclipse was when I was a kid living in Southern California.  I watched the eclipse on the concrete floor of the garage, projected through a hole in the old wood-shake roof.  Remembering this, I decided to use the projection method to observe this eclipse.  After some trial and error, I finally got my jury-rigged pinhole projector to work. 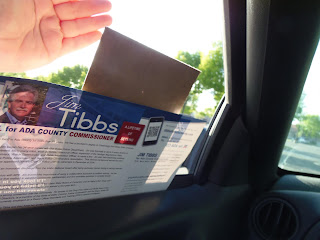 This set-up might have been more elegant if I had been more organized.  The campaign ad covers a too-large hole in the cardboard.
And here is the equally jury-rigged projection screen: a small notepad I use for grocery lists. 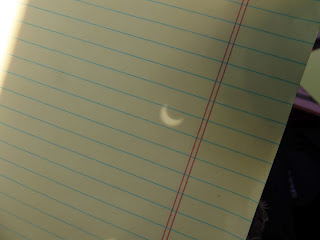 I remember that the world looked quite odd under the first partial eclipse I ever saw.  The sun was noticeably dimmer, as though it were cloudy out, but instead of the diffuse sunlight that shines through clouds, one saw the same clear-cut shadows as when the sky is cloudless.  This time, even at maximum eclipse, the sun did not appear dimmer because it had been partly cloudy all day. Here's the projection at the moment of maximum eclipse.  The sun was just a sliver, like a fingernail clipping, yet it would still have been far too bright to look at directly. 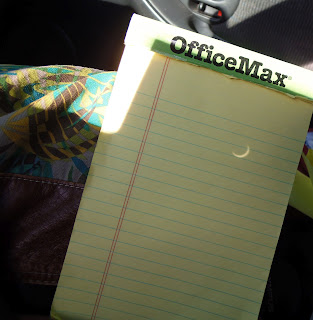 After maximum eclipse, the clouds came back, and it was possible to get another direct shot at the sun, which is circled in red.  If you look closely, you can just make out the crescent shape.  (Note: see note above.  Never gaze directly at the sun without some safety equipment.) 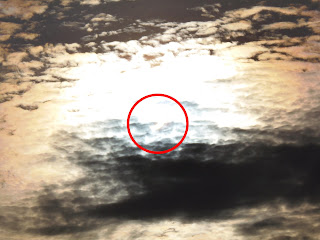 I hope next time I have the chance to see a solar eclipse, I will be more organized and better set up.  I also hope one of these days to be in the path of totality.  Still, even a partial eclipse is pretty cool.
Posted by Anita Moore at 23:35