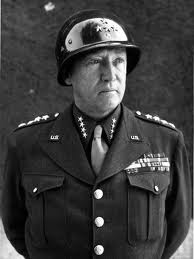 A tip from the peerless Father Erik has led to about an hour's reading on a subject not inappropriate for Memorial Day: one of America's most colorful and successful generals, George S. Patton.  In view of Patton's work, beliefs, sayings, and general outlook on life, it was perhaps a mercy that he did not long survive the troops who had given their lives under his command, or live to see the fruits of their hard-won victories squandered.  It is not hard to guess what his take would have been on the West's increasing post-war confusion, or the muddle of the Vietnam War, in which his own son, George Patton IV, served as a general, and which our politicians willed to lose. It is tempting to meditate on what would happen if, by some miracle of modern medicine, the elder Patton had lived long enough to find himself under the overlordship of the present occupant of the White House.

One notable incident of Patton's career in the European Theater has become distorted in our sissified, politically correct times, and needs to be set straight.  The 1970 movie Patton contains a scene in which the general is shown bullying a chaplain into praying for good weather for killing Germans, against the chaplain's conscience.  The chaplain in question -- Msgr. James H. O'Neill, Chief Chaplain of the Third Army -- told a rather different story in an account he wrote in 1950, which was published 21 years later in Review of the News, when Msgr. O'Neill was a retired brigadier general.  He describes General Patton as a devout and practicing Episcopalian, possessing "all the traits of military leadership, fortified by genuine trust in God, intense love of country, and high faith In the American soldier"; he describes himself, the allegedly bullied chaplain, as not at all reluctant to carry out his commander's wishes in the matter of the prayer.

The story begins, interestingly enough, on the Solemnity of the Immaculate Conception, December 8, 1944.  Disturbed by the unrelenting, torrential rain that hampered his war effort, Patton called up the Chief Chaplain and asked him if there was a prayer for good weather.  Not finding an appropriate prayer, the chaplain undertook to compose his own:

Almighty and most merciful Father, we humbly beseech Thee, of Thy great goodness, to restrain these immoderate rains with which we have had to contend. Grant us fair weather for Battle. Graciously hearken to us as soldiers who call upon Thee that, armed with Thy power, we may advance from victory to victory, and crush the oppression and wickedness of our enemies and establish Thy justice among men and nations.

Chaplain O'Neill typed the final draft of this prayer on a 5"x3" filing card, along with a Christmas message to the troops from Patton, and presented it to the general, who affixed his signature to the Christmas message and ordered the printing of a quarter of a million copies for distribution to every man in the Third Army.

Then Patton asked O'Neill a question that would probably get a commanding officer in today's Army court-martialed: how much praying was being done in the Third Army?  When told that not much prayer was going on, Patton said:

Chaplain, I am a strong believer in prayer. There are three ways that men get what they want; by planning, by working, and by praying. Any great military operation takes careful planning, or thinking. Then you must have well-trained troops to carry it out: that's working. But between the plan and the operation there is always an unknown. That unknown spells defeat or victory, success or failure. It is the reaction of the actors to the ordeal when it actually comes. Some people call that getting the breaks; I call it God. God has His part, or margin in everything. That's where prayer comes in. Up to now, in the Third Army, God has been very good to us. We have never retreated; we have suffered no defeats, no famine, no epidemics. This is because a lot of people back home are praying for us. We were lucky in Africa, in Sicily, and in Italy. Simply because people prayed. But we have to pray for ourselves, too. A good soldier is not made merely by making him think and work. There is something in every soldier that goes deeper than thinking or working--it's his "guts." It is something that he has built in there: it is a world of truth and power that is higher than himself. Great living is not all output of thought and work. A man has to have intake as well. I don't know what you it, but I call it Religion, Prayer, or God.

Whereupon the general ordered the chaplain to draft a training letter to all the chaplains on the importance of prayer.  "We've got to get not only the chaplains but every man in the Third Army to pray. We must ask God to stop these rains. These rains are that margin that hold defeat or victory."

So Chaplain O'Neill got to work on Training Letter No. 5.  Both it and the prayer cards were distributed to the troops in the Third Army between December 12-14.  On December 16th, the Germans, favored by the poor weather, launched their final offensive of the war through the Ardennes: the Battle of the Bulge.  On the 19th, Patton and his Third Army rushed to Bastogne to meet it; and on the 20th came perfect weather for wave after wave of Allied air attacks on the Germans.  The prayer for good weather was answered, and the Germans were defeated.

What if George S. Patton had lived to observe the state of this country in 2012?  No doubt his prescription would include, among other things, planning, working and -- above all -- praying.  Especially praying: and to hell with any executive orders, acts of Congress, federal regulations, Supreme Court decisions or any other government directives to the contrary.
Posted by Anita Moore at 18:48