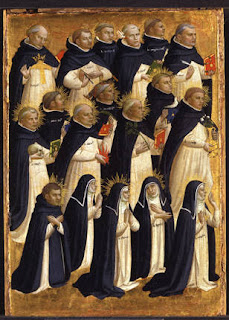 Ever wonder why the religious orders went so far off the rails?  Since the crisis in the religious life is much in the news with the crackdown on the LCWR, it seems worthwhile to focus attention on the thoughts of Jean Cardinal Daniélou (1905-1974).  Forty years ago, this brave Jesuit gave an interview on Vatican Radio in which he spoke frankly about the insanity that was already blatantly apparent in the religious life, its causes and the necessary remedies.  For this, he was ostracized by his brother Jesuits, and his untimely death was permitted to appear as though it had taken place under compromising circumstances.

The crisis of consecrated life is a worthwhile subject of consideration, for the simple reason that the rot and corruption within convents and priories and monasteries spread far beyond their walls.  St. Paul tells us that when one part of the Body of Christ suffers, the whole Body suffers with it; surely no one can doubt that the infirmities of secular society are intimately linked to those in the religious orders.  A sample of Cardinal Daniélou's brief yet powerful interview:

I think that there is now a very grave crisis of religious life, and that one should not speak of renewal, but rather of decadence. I think that this crisis is hitting the Atlantic area above all. Eastern Europe and the countries of Africa and Asia present in this regard a better state of spiritual health. This crisis is manifesting itself in all areas. The evangelical counsels are no longer considered as consecrations to God, but are seen in a sociological and psychological perspective. We are concerned about not presenting a bourgeois facade, but on the individual level poverty is not practiced. The group dynamic replaces religious obedience; with the pretext of reacting against formalism, all regularity of the life of prayer is abandoned and the first consequence of this state of confusion is the disappearance of vocations, because young people require a serious formation. And moreover there are the numerous and scandalous desertions of religious who renege on the pact that bound them to the Christian people.

Get the whole thing here.