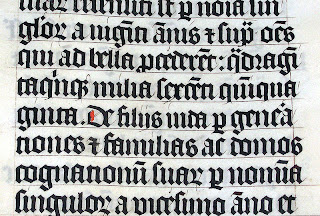 After reading the news that Hildegard of Bingen is to be raised to the altar and declared a Doctor of the Church, I ordered a copy of an English translation of her mystical work Scivias.  I have a CD with some of her musical compositions -- which are very beautiful -- but I had never read any of her works.

And after cracking this translation of Scivias, I fear I still haven't read any of her works.

I ordered this book with some trepidation, as all the English translations I could find date back to within the last 30 years.  When it comes to spiritual reading, I generally look for what one might describe as "antediluvian": works or translations of works that predate the flood of arrant nonsense and outright heresy that swept over the earth in the wake of the Second Vatican Council.  The particular volume I ended up selecting -- the Bruce Hozeski translation from the Critical Latin Edition published by Bear & Company, Santa Fe, New Mexico in 1986 -- looked the most innocuous, so I paid the three dollars and change plus shipping and waited.

And soon discovered it was three dollars and change plus shipping too much.  Not that I have any complaints with the merchant I bought the book from: indeed, it was sent very promptly and arrived a lot more quickly than I expected.  But when I saw that it contained a forward by Matthew Fox, the ex-Dominican-priest-turned-Episcopalian-synchretist who was expelled from the Order of Preachers, my heart sank.  This forward certainly represents the absolute zero in human goofiness: Fox tries to shoe-horn Hildegard's thought into his own kooky ideology, all while reducing her mystical experiences to the physiological effects of migraines brought on by being stuck in the impossible situation of having to fight against a sexist, male-dominated Church.  But the content of the book, purportedly by Hildegard herself -- in which I must confess to not having found myself able to plow very far -- did nothing to lift the heart out of its Foxian doldrums.

The Editor's Note at the beginning is full of dire portent.  It makes clear that the editors cut out anything that they considered "irrelevant or difficult to comprehend today."  They adopted a particular chopping methodology -- getting rid of whole sections rather than parts of sections --  ostensibly to "avoid distortion as much as possible," apparently oblivious to the fact that they were distorting the work precisely by filtering it through their lenses of relevance and difficulty.  Besides which: who were these editors to save me from deciding for myself what is irrelevant or too difficult?  Given some of the people associated with this project, and the era of its provenance, I can't help thinking the "irrelevant" or "difficult" stuff must be anything that fails to support some particular brand of heterodoxy.

Then there was the deliberate decision to edit out Hildegard's citations to authority:

Hildegard was an astonishingly brilliant woman during an age when such talent and sensitivity were suppressed.  Many Hildegard admirers, myself included, feel that Hildegard expressed herself very powerfully and individually, and then attempted to justify her thought by presenting supportive ideas from other sources -- such as the Gospels, patriarchs, and prophets, or by citing the Church opinion of her day.  We found the elimination of much of this supportive and repetitive text caused a clearer and more visionary text to emerge.

In other words, Hildegard shrank from putting herself forward as her own authority, so We, the Great and Wise Editors, are going to do it for her.  It is just not on for a prophet to set forth her prophecies within the framework of Authority, even though it is the Authority of Christ Himself through His Church.  Thus are English readers of Scivias to be deprived of Hildegard's insights into Scripture and the Fathers and the Magisterium.  Thus also do the editors suppress the evidence of Hildegard's great scholarship and intellect in their quest for "a clearer and more visionary text."

I can't say I feel sure what a "visionary text" is exactly, as these guys mean it.  But I do have a fair idea what constitutes a "clearer text," and it is obvious that this was not what we got when the editors of this translation decided to use "inclusive language."  As a woman, I find "inclusive language" as patronizing and insulting as it is annoying; as a serious reader, I suspect it really excludes not only all things male but also the true sense of the original text.  "Inclusive language" also proves that its proponents have no sense of humor, since they do not perceive the hopelessly idiotic grammatical contortions to which their stubborn refusal to use masculine pronouns drives them.  Witness the following choice example from page 14:

But Lucifer, who had been cast down from heavenly glory because of pride, at first stood special and great because Lucifer did not yet know of Lucifer's weakness in grace and strength.  Indeed, when Lucifer thought about grace and the power of self-strength, Lucifer became proud.  This caused Lucifer to expect that Lucifer might attempt whatever Lucifer wished, because Lucifer had previously been able to finish whatever Lucifer started.  Seeing a place where Lucifer thought that a stand could be made, and wishing to show grace and self-strength there, Lucifer said to God: "I wish to shine here in that manner and there in that manner."  Every idea of Lucifer's agreed with this, and Lucifer said: whatever you wish, we also wish this too.  And when Lucifer was puffed up with pride and wanted to do what Lucifer had just thought about, the zeal of God -- extending itself -- threw Lucifer and the entire company into the burning blackness, so that they seethed against the brightness and clearness which they had had and they were blackened.

From the howling desert of the mid-'80s, the heyday of modernist theologians of the Matthew Fox vintage, we seem to have crawled into the edge of an oasis.  The sandstorm that has lashed us for decades is beginning to give way; the heritage that we had lost for so many years is back in sight, still dim, yet unmistakable.  Among other signs of the restoration, the new English translation of the Mass, faithful to the original Latin text, is now in use, and the translators' next project is said to be the Liturgy of the Hours.  Since this seems to be the era of dumping lousy translations, I hereby nominate the 1986 Hozeski inclusive-language translation of Scivias for inclusion in the ash-heap of history.  And since Hildegard of Bingen is to be a new saint and Doctor of the Church, I hope some intrepid and gifted translator feels called upon to give the English-speaking world a complete, faithful and artistically rendered translation of her works.

P.S. I wish somebody would get on the stick and also translate some more of St. Albert the Great's writings into English.
Posted by Anita Moore at 23:38