Yes, Please Keep Your Cooties to Yourself 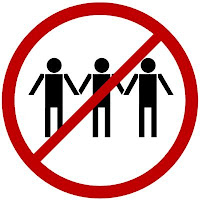 I hope Fr. Finigan does not mind my lifting this great picture which perfectly captures my sentiments on the subject of hand-holding during Mass.  In a word, I can't stand this practice.  It is one of the reasons I wear a veil at Mass: it sends the message -- pretty effectively -- that I am highly unlikely to welcome hand-holding.  If somebody does forcibly grab my hand, I just look that person the eye and tell him no, I do not hold hands. I don’t see where it is uncharitable not to submit to this importunity.  On the contrary, I ask where the charity is in allowing people to force themselves on others with impunity. If they don’t know better, then they need to learn; if they do know better, then they need to be reproved.

Fortunately, priests and even bishops are beginning to come to the aid of their shy, reserved, and introverted lambs and beat back the assault of touchy-feely-ness at Mass.  Bishop Roger Foys of the Diocese of Covington, Kentucky is putting the kibosh on hand-holding during the Our Father on the grounds that it is not a legitimate part of the liturgy.  Naturally, this is creating an uproar among the poorly formed.  Those of us, however, who recoil with horror from unwarranted intrusions into our personal space wish blessings upon the good bishop and hope and pray for a great many more like him.

What the touchy-feely, group-therapy-oriented crowd don't seem to get is that touching such as hand-holding, hugging, etc. are products of real intimacy and not producers of it.  You can't create intimacy with another person by forcing that other person to accept an imposition.  As the great 20th-century Catholic philosopher Dietrich von Hildebrand pointed out, there are steps to be gone through on the path to intimacy with another person — even God.  This truth is exemplified beautifully in the Extraordinary Form of the Mass in the prayers at the foot of the altar, wherein the priest only approaches the altar of sacrifice by degrees, after putting himself on his guard against presumption and irreverence, and carefully preparing his soul by contrition for his sins.  The steps to intimacy are necessary; hand-holding with strangers and other foolish practices designed to bypass them violate the natural order.

In fact, I will go farther and submit that there is a sinister purpose behind these ice-breaking exercises, namely, the breaking down of necessary inhibitions, thereby making individuals vulnerable to manipulation.  Indeed, a great deal of what we have been seeing and hearing at Mass in recent decades must be characterized as manipulation: the secular music; the gimmicky props and vestments; the joke-laced homilies; the touchy-feely intrusions.  In none of this stuff is there any food for the intellect or even the memory.  Take the stuff away and people scream that they are being deprived of that which brings them closer to God; but really, they have just been having their emotions massaged and manipulated.  After such soothing treatment, we are prepared to swallow anything served up to us, which is what we have been doing, to our detriment, for the last half-century.

So thank God for the shepherds who are doing something to divest Catholic worship of the worldly accretions and encrustations that have done so much damage to our faith and our Christian witness.
Posted by Anita Moore at 19:21