Not All that Gets Thrown Out Is Trash 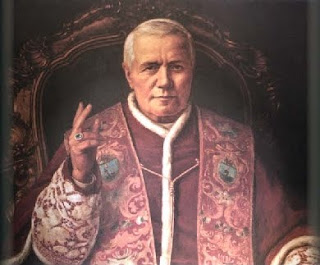 In his 1907 encyclical Pascendi Domini gregis, Pope St. Pius X identified and condemned modernism, which he dubbed the "synthesis of all heresies."  Seeing the ground that the modernists continued to gain, St. Pius issued the motu proprio Sacrorum Antistitum in 1910, in which he ordered all clergy, seminary professors, preachers, religious superiors, holders of eccelsiastical office, etc., to swear an oath against modernism.  This order held until after the Second Vatican Council, when the oath ceased to be required.

Now that the oath is no longer sworn, the question arises: what could any orthodox priest, bishop or religious superior find objectionable in it?  Who gained by not having to swear it anymore?  By the time the oath was discarded, modernism had gained more ground than ever in the Church.  The oath clearly sets forth what it is that must be rejected, so no one could plausibly argue that he had to take it in a state of ignorance.  The inevitable conclusion, then, is that some of those who were required to take the oath swore falsely.  One shudders to think of newly-ordained priests beginning their ministry with an act of perjury.

Today, the tide is turning, but modernism is still woven closely into the fabric of Church life.  How many of us, even at this late date, have not heard the old modernist chestnut that the Feeding of the Five Thousand was merely a "miracle of sharing"?  Or that Jesus did not know He was God?  Or that the Blessed Virgin made the Visitation to her cousin Elizabeth in order to escape lynching because she was unmarried and pregnant?  (Yes, I actually heard that one from the pulpit.)  And how many of us still have to attend Masses that look more like Broadway musicals or night club acts than the unbloody re-presentation of the Sacrifice of Calvary?

THE OATH AGAINST MODERNISMGiven by His Holiness St. Pius X September 1, 1910.To be sworn to by all clergy, pastors, confessors, preachers, religious superiors, and professors in philosophical-theological seminaries.I . . . . firmly embrace and accept each and every definition that has been set forth and declared by the unerring teaching authority of the Church, especially those principal truths which are directly opposed to the errors of this day. And first of all, I profess that God, the origin and end of all things, can be known with certainty by the natural light of reason from the created world (see Rom. 1:90), that is, from the visible works of creation, as a cause from its effects, and that, therefore, his existence can also be demonstrated: Secondly, I accept and acknowledge the external proofs of revelation, that is, divine acts and especially miracles and prophecies as the surest signs of the divine origin of the Christian religion and I hold that these same proofs are well adapted to the understanding of all eras and all men, even of this time. Thirdly, I believe with equally firm faith that the Church, the guardian and teacher of the revealed word, was personally instituted by the real and historical Christ when he lived among us, and that the Church was built upon Peter, the prince of the apostolic hierarchy, and his successors for the duration of time. Fourthly, I sincerely hold that the doctrine of faith was handed down to us from the apostles through the orthodox Fathers in exactly the same meaning and always in the same purport. Therefore, I entirely reject the heretical' misrepresentation that dogmas evolve and change from one meaning to another different from the one which the Church held previously. I also condemn every error according to which, in place of the divine deposit which has been given to the spouse of Christ to be carefully guarded by her, there is put a philosophical figment or product of a human conscience that has gradually been developed by human effort and will continue to develop indefinitely. Fifthly, I hold with certainty and sincerely confess that faith is not a blind sentiment of religion welling up from the depths of the subconscious under the impulse of the heart and the motion of a will trained to morality; but faith is a genuine assent of the intellect to truth received by hearing from an external source. By this assent, because of the authority of the supremely truthful God, we believe to be true that which has been revealed and attested to by a personal God, our creator and lord.Furthermore, with due reverence, I submit and adhere with my whole heart to the condemnations, declarations, and all the prescripts contained in the encyclical Pascendi and in the decree Lamentabili, especially those concerning what is known as the history of dogmas. I also reject the error of those who say that the faith held by the Church can contradict history, and that Catholic dogmas, in the sense in which they are now understood, are irreconcilable with a more realistic view of the origins of the Christian religion. I also condemn and reject the opinion of those who say that a well-educated Christian assumes a dual personality-that of a believer and at the same time of a historian, as if it were permissible for a historian to hold things that contradict the faith of the believer, or to establish premises which, provided there be no direct denial of dogmas, would lead to the conclusion that dogmas are either false or doubtful. Likewise, I reject that method of judging and interpreting Sacred Scripture which, departing from the tradition of the Church, the analogy of faith, and the norms of the Apostolic See, embraces the misrepresentations of the rationalists and with no prudence or restraint adopts textual criticism as the one and supreme norm. Furthermore, I reject the opinion of those who hold that a professor lecturing or writing on a historico-theological subject should first put aside any preconceived opinion about the supernatural origin of Catholic tradition or about the divine promise of help to preserve all revealed truth forever; and that they should then interpret the writings of each of the Fathers solely by scientific principles, excluding all sacred authority, and with the same liberty of judgment that is common in the investigation of all ordinary historical documents.Finally, I declare that I am completely opposed to the error of the modernists who hold that there is nothing divine in sacred tradition; or what is far worse, say that there is, but in a pantheistic sense, with the result that there would remain nothing but this plain simple fact-one to be put on a par with the ordinary facts of history-the fact, namely, that a group of men by their own labor, skill, and talent have continued through subsequent ages a school begun by Christ and his apostles. I firmly hold, then, and shall hold to my dying breath the belief of the Fathers in the charism of truth, which certainly is, was, and always will be in the succession of the episcopacy from the apostles. The purpose of this is, then, not that dogma may be tailored according to what seems better and more suited to the culture of each age; rather, that the absolute and immutable truth preached by the apostles from the beginning may never be believed to be different, may never be understood in any other way.I promise that I shall keep all these articles faithfully, entirely, and sincerely, and guard them inviolate, in no way deviating from them in teaching or in any way in word or in writing. Thus I promise, this I swear, so help me God.