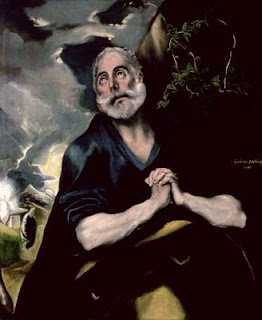 I have been listening to Bach's St. Matthew Passion (conducted by Leonard Bernstein and performed in English); and this, coupled with a recent Fr. Z. post about the sin of presumption, has gotten me to thinking about Peter's three-fold denial of the Lord.

Peter's sin was basically the same as the sin of Judas.  We are accustomed to distinguish Peter from Judas by looking to the fact that Peter repented of his sin, while Judas gave in to despair.  Both realized the horror of what they had done, but unlike Peter, Judas failed to have recourse to the forgiveness that would have been his for the asking.

It is easy to see how sin made its way into the heart of Judas: greed.  But how did Peter, who loved Jesus above all things, fall into sin?  Was it not because he thought he could resist temptation all on his own?

Imagine if, instead of protesting that he would not betray Jesus even if it meant his death, Peter had asked the Lord not to let him give in to temptation.  How many things in our lives would have turned out differently, had we done that?
Posted by Anita Moore at 20:54