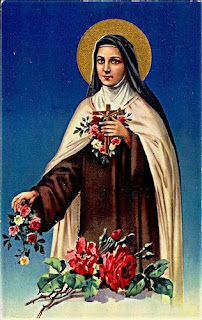 The Communion of Saints is not a figment of the Catholic imagination, as St. Therese of Lisieux herself testified.  Since her death in 1898, she has continued to prove it.  Her Little Way was instrumental to the sanctity of Fr. Willie Doyle, S.J., the "Trench Priest" of World War I who was born in 1873 -- the same year as the Little Flower herself -- and killed at the Battle of Ypres in 1917.  Because of this influence of hers on this courageous and lovable priest who did not live even to see her declared Venerable, many souls were saved.

St. Therese is often remembered for her promise to let fall a shower of roses after her death.  Let no one scoff at the weakness of those who ask for roses as a sign of her intervention: there is a reason for it.  Just ask Fr. Gordon McRae.

For the Feast of St. Therese, say 24 Glory Be's, in thanksgiving to the Holy Trinity for each of the 24 years of this saint's life on earth.  In the third year of her life, she formed her determination to give herself entirely to God; in her fifteenth, she entered Carmel. 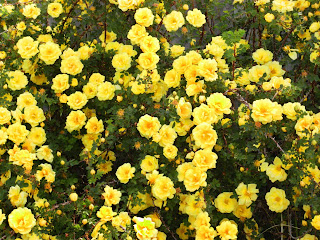