The Abdication of Francis: Wishful Thinking 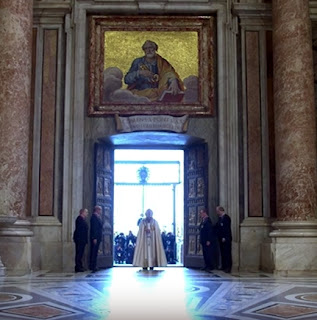 Rumors are picking up that Pope Francis is about to abdicate.  So many people are so tired of Pope Francis and his sledgehammer style of governance that they seem quite ready to believe it, and are speculating on when this event nobody knows will happen is to take place.  Pope Francis himself has hinted in the past that he has not ruled out the possibility of following the example of his immediate predecessor and stepping down.
Me?  As much as I look for the light at the end of the dark tunnel of this pontificate, I don't buy it, and I don't hope for Francis to abdicate.
Why don't I hope for Francis to abdicate?  Number one, I don't think papal abdications are, on balance, a good thing for the Church.  Up to now, they have been extremely rare, and rare they should remain.  The latest abdication, after all, brought us -- Francis.  Number two, the abdication of this Pope, who has been swelling the college of cardinals far beyond its normal size in order to pack it with his cohorts, would be an ominous sign: a sign that the fix is in (humanly speaking) for Francis 2.0.
But in any case, I don't see it happening.  It has indeed been terrifying to see a man in his mid-eighties and in obviously poor health double and treble down on effectively excommunicating the whole Church.  But he appears determined to carry on.  From whence could he continue his campaign of smashing up everything recognizably Catholic, if not from his present position?  His prestige would fall to zero if he stepped down.  No, I think the papacy will have to be pried from Francis' cold, dead fingers.
Could I be wrong?  Sure.  My crystal ball is at the cleaner's.  But I don't think I am wrong.  It is going to be up to God to deliver us from the hirelings into whose hands we have fallen.
Posted by Anita Moore at 14:40