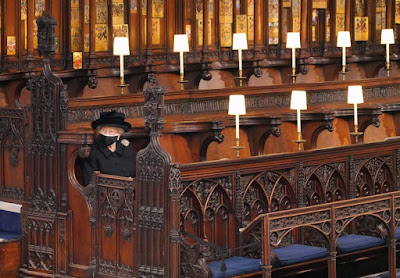 This is the image of a moral outrage, an elephant in the room that ought on no account to be ignored or glossed over amid praise for how moving was the funeral of Prince Philip.  It is a sign of how far the West has fallen, that the fear of a virus with an almost 100% survival rate has moved us to cast out kindness, charity and compassion.  This is the brave new world our owners and masters are preparing for us.  For over a year, bereaved families all over the world have been severely hindered if not completely prevented from paying their last respects to their beloved dead; now we see that not even the most venerable and highly-placed people — at least those who represent the last remaining shreds of authentic Christian civilization — are exempt from these appalling strictures.  Elizabeth II, Queen of England, age 94, the longest-reigning monarch in British history, sits all alone at the funeral of Prince Philip.  Newly widowed after 73 years of marriage, she is deprived of the consolation of her family and her subjects.  Miles away from any other human being, she is compelled to mask up.  That there is no way, seated all by herself, that she could possibly catch or communicate the coronavirus, is further proof that the face muzzle is really a yoke of submission and has nothing whatsoever to do with stopping the spread of disease.  Even in her grief, Elizabeth Regina is pressed into the service of furthering the agenda of the godless antiseptic dictatorship.

On a human level, the treatment Britian’s political class is meting out to their Sovereign is an outrage, even after two centuries of revolutions and regicides that have blunted and coarsened our sensibilities.  On a societal level, it should show us how complete is the triumph of totalitarianism, when even the Queen of England is a slave of the microbes who, disguised as servants of the people, rule us all with an iron rod.

One of the big takeaways of the coronapanic is the glaring proof that the result of toppling throne and altar in the West has not been the advent of freedom, but of godless, amoral oligarchies.  We are no longer ruled by Christians who take to heart their obligations to those under them, and fear eternal damnation for misruling them, but by ruthless moneyed interests who care only about human beings to the extent they find them useful, and do not even believe in hell, much less fear going there.  In Britain, the appalling treatment of their widowed Queen proves that the monarchy is effectively abolished in all but name.  This is the evil fruit of Henry VIII’s break from the Catholic Church: that the oligarchy he set up to help him crush Catholicism within his realms should make slaves even of his distant successors.

God rest Prince Philip.  God save the Queen.  God rescue us from our apostasy and self-inflicted thralldom.