Repost: Potuit, Decuit, ergo Fecit: Why the Immaculate Conception Must Be True 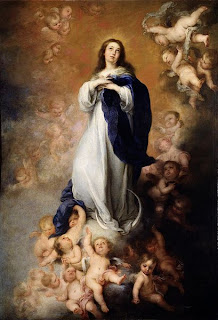 I will shew thee all good, and I will proclaim in the name of the Lord before thee: and I will have mercy on whom I will, and I will be merciful to whom it shall please me.
Exodus 33:19

Once in a while, a comment comes along that deserves a post-length response.  Here, from a self-professed ex-Catholic turned non-denominational, is one that just came in on my post about the appalling song "Mary, Did You Know?":

Mary had to have sinned. She called Jesus "my Savior" and what is Jesus the Savior for? Sinners. She had sinned. And there is no biblical evidence for her having no sin.

Those of you with a kick against the Immaculate Conception always want to set limitations on God.  You generally have no problem acknowledging in theory that God is infinitely good, infinitely holy, infinitely perfect, infinitely merciful and infinitely powerful; but in practice, what you really want is a sort of bite-sized God, One that we can wrap our woefully inadequate brains around and Who does not confound our puny capabilities.  So when God actually goes and does something that only an infinitely good, holy, perfect, merciful and powerful Being could do, you protest.  The fact, however, is that God can do whatever He wants; and whatever is fitting, we may be sure that He will do.

God can do the impossible more rapidly and easily than we can blink our eyes or draw a breath.  It was perfectly within His power to preserve Mary free from the taint of sin from the instant of her conception.  This singular privilege of His grace was purchased for her by the limitless merits of Christ's suffering and death on the Cross.  God, not bound by the constraints of time or space, was perfectly capable of applying these merits beforehand and granting this privilege in advance of the Crucifixion.  Thus God really was Mary's Savior, and did not need her to sin in order to be her Savior: His intervention to prevent her from receiving the taint of sin that she would otherwise have contracted as a descendant of Adam was also a salvific act.  Have you never been prevented from committing sins -- by being deprived of means or opportunity, or because you have never experienced the temptation to commit particular sins?  These are also interventions of God's grace.  So you should know from experience that God saves us, not only by forgiving sins we have actually committed, but also by preventing us from committing sins we would otherwise have committed, perhaps to our eternal ruin.   Why, then, should it be so hard to accept that God, out of the abyss of His goodness and mercy, could exercise His infinite power to prevent the Mother of His Son from being tainted by the least stain of iniquity from the very instant she began to exist?

It is altogether fitting that God should preserve Mary inviolate and immaculate from the first instant of her life.  God always gives us the grace we need to do the work He gives us: the greater the work, the greater the grace given to carry it out.  Was ever a more important mission given to a mere human being than that entrusted to Mary?  It was her task to supply the matter out of which the all-holy Son of God would take flesh, to bear Him in her womb, to nurse Him and to rear Him to manhood, and to share in her soul in the agonies of His Passion.  This touches on a point raised by my correspondent in a follow-up comment:

Jesus was the perfect sacrifice for dying for our sins because He was without blemish. If Mary had no blemish either, that would pretty much validate her for crucifixion too. Which would make Jesus less important.

Here my correspondent, though off the rails in the implications for the importance of Jesus, hits on an important truth.  Mary did in fact suffer with her divine Son, more than any other human being could have.  The saints (e.g., St. Alphonsus Liguori) are of the opinion that her sufferings were greater than that of all other men who have ever lived or will ever live put together, and that only a miracle kept her from dying of grief.  This is why Catholics honor her under the titles of Mother of Sorrows and Queen of Martyrs: only her Son's sufferings exceeded hers.  When she presented her Son in the Temple, holy Simeon prophesied that a sword would pierce her soul, that out of many hearts, thoughts may be revealed (Luke 2:35).  It makes sense that she should bear so great a share in her Son's Passion: not only was she his loving mother; she was also fully aware that He was God, and therefore of the horrible outrage that He should be murdered by His own creatures.  Moreover, would it have been possible for her to suffer entirely for his sake and not at all for her own if she herself had had a share in the sins that caused Him to be nailed to the Cross?  Still, this share of hers in Christ's suffering does not in any way diminish Him.  Jesus was the perfect Sacrifice not only because He was without blemish, but because He was God.  Mankind had outraged the infinite God, and therefore it would take infinite merits to repair the outrage; these could only be offered by the Son of God.

If you do not accept the Immaculate Conception, then I am bound to ask you why you would want the Mother of God to have been a sinner.  Is this not tantamount to wanting an unworthy vessel for the Incarnate God?   Does it make sense for the woman entrusted with bearing and caring for and suffering alongside the Son of God to have spent even a single instant under the dominion of hell?  No: especially when you consider that the Woman of Genesis 3:15, between whom and the serpent God put enmity is none other than the Mother of God, and her Seed is none other than Jesus Christ:

I will put enmities between thee and the woman, and thy seed and her seed: she shall crush thy head, and thou shalt lie in wait for her heel.

Here is scriptural proof of the Immaculate Conception.  If God creates perfect and implacable enmity between the Woman and the serpent -- and surely it is unthinkable that if God creates enmity between the Mother of God and evil, this enmity will be imperfect and half-hearted -- then it follows that she could never be under the serpent's sway, or in allegiance with him, as she must be if she had sinned.  Thus it was fitting for God to preserve her without sin from the very beginning.

Since it was perfectly possible for God to preserve Mary free from sin from the moment of her conception, and it was fitting that He should do so, it follows that He in fact did do so.  It would be a gross omission on God's part, and incompatible with His infinite perfection, if He should leave undone that which was fitting.  Therefore, we may safely take it that He did not leave it undone.

Potuit, decuit, ergo fecit! He could; it was fitting; therefore, He did it!