The Second of July: A New Birth of Freedom 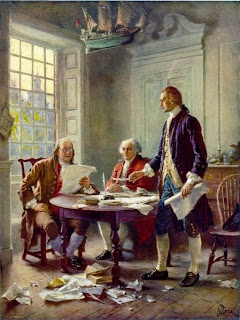 We hold these truths to be self-evident, that all men are created equal, that they are endowed by their Creator with certain unalienable Rights, that among these are Life, Liberty and the pursuit of Happiness.

That to secure these rights, Governments are instituted among Men, deriving their just powers from the consent of the governed, That whenever any Form of Government becomes destructive of these ends, it is the Right of the People to alter or to abolish it, and to institute new Government, laying its foundation on such principles and organizing its powers in such form, as to them shall seem most likely to effect their Safety and Happiness. Prudence, indeed, will dictate that Governments long established should not be changed for light and transient causes; and accordingly all experience hath shewn, that mankind are more disposed to suffer, while evils are sufferable, than to right themselves by abolishing the forms to which they are accustomed. But when a long train of abuses and usurpations, pursuing invariably the same Object evinces a design to reduce them under absolute Despotism, it is their right, it is their duty, to throw off such Government, and to provide new Guards for their future security.

Fast forward 87 years to another July 2nd: the day on which a great battle is being fought about 110 miles west of the spot where America declared her independence.  We look back on that battle from the vantage point of 150 years in the future and see, in the culmination of Robert E. Lee's second -- and last -- attempt to invade the North, the turning point of the Civil War.  Yesterday (which, by the way, was also the Feast of the Precious Blood of Jesus) was the anniversary of the beginning of the Battle of Gettysburg.  150 years ago today, the 20th Maine, under Col. Joshua Lawrence Chamberlain, famously defended Little Round Top, repulsing and scattering John Bell Hood's 15th Alabama Regiment with a fixed-bayonet charge that may have saved the battle, and therefore the whole War, for the Union.  Tomorrow is the 150th anniversary of Pickett's Charge, the futile Confederate infantry assault that marked the South's "high water mark," its farthest penetration into the Union line at Gettysburg and the closest it came to winning the war.

Around 50,000 Americans, North and South, perished at Gettysburg.  A few months later, on November 19, 1863, the Battle of Gettysburg would inspire ten of the most celebrated sentences ever uttered in the English-speaking world:

Four score and seven years ago our fathers brought forth on this continent a new nation, conceived in liberty, and dedicated to the proposition that all men are created equal.  Now we are engaged in a great civil war, testing whether that nation, or any nation so conceived and so dedicated, can long endure. We are met on a great battlefield of that war. We have come to dedicate a portion of that field, as a final resting place for those who here gave their lives that that nation might live. It is altogether fitting and proper that we should do this.

But, in a larger sense, we can not dedicate, we can not consecrate, we can not hallow this ground. The brave men, living and dead, who struggled here, have consecrated it, far above our poor power to add or detract. The world will little note, nor long remember what we say here, but it can never forget what they did here. It is for us the living, rather, to be dedicated here to the unfinished work which they who fought here have thus far so nobly advanced. It is rather for us to be here dedicated to the great task remaining before us—that from these honored dead we take increased devotion to that cause for which they gave the last full measure of devotion—that we here highly resolve that these dead shall not have died in vain—that this nation, under God, shall have a new birth of freedom—and that government of the people, by the people, for the people, shall not perish from the earth.

As our nation lies again under mortal peril, this time from her own government, we must remember and contemplate our history, and the sacrifices made by so many for generations they knew they would never live to see; we must renew our high resolution that the dead who have given the last full measure of devotion to the cause of this nation shall not have died in vain.
Posted by Anita Moore at 21:21