A rare treat for Pentecost: Holy Mass in the Extraordinary Form at the old St. Francis Church in Bend, Oregon, celebrated, as ever, by the inimitable and irrepressible Rev. Andrew Szymakowski.  Your humble correspondent had the privilege of joining the local schola cantorum (directed by Stephanie Swee) in the loft.  We also had the benefit of the expertise of Father's old friend Bill Costa, a retired chorister and director from Dallas, Texas.

St. Francis did not entirely escape the ravages of the spirit of Vatican II (carpeting, stark Novus Ordo ironing board in front of the main altar, and no more altar rail), but it is still a beautiful little church.  It is, however, also a poorly-lit church, and so I was not able to get pictures of the high altar and reredos, which contains some of the most stunning statues I have ever seen of St. Francis, St. Patrick and St. Teresa of Avila.  Still, I did not leave with an empty memory card.  Here is one of the side altars: 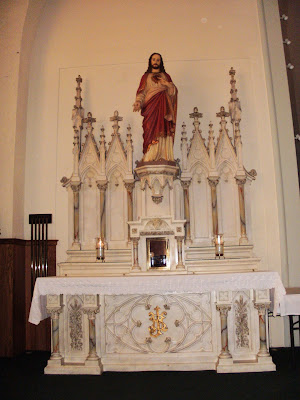 And here is the statue of Our Lady on top of the other side altar: 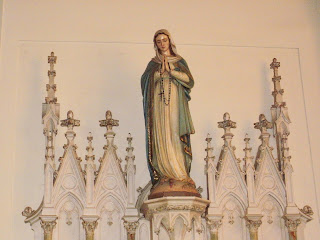 It was a beautiful Mass, for which alone the six-hour drive to Bend would have been worthwhile.  But there was more to come. On the old calendar, Pentecost is not over: this is the Octave of Pentecost.  Instead of heading straight home on Monday morning as planned, I went up to the little town where Father is currently stationed and attended High Mass for Pentecost Monday and Pentecost Tuesday.  Bill Costa and I formed the choir for both Masses.  The rest of the time was devoted to meals, conversation and laughter -- just like in the Nyssa days when we'd take Father to dinner after Mass.  By the time I started back for home on Tuesday, the three of us had all the world's problems solved.

So I got not one, not two, but three High Masses this weekend, as well as three and a half days in Oregon making new friends and visiting with old ones.  It was a tonic for body and soul.
Posted by Anita Moore at 21:35