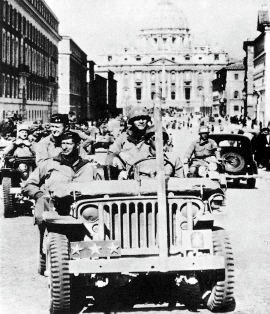 Sixty-seven years ago today, American troops led by Lt. Gen. Mark Clark captured Rome.  This is General Clark riding in his Jeep past St. Peter's Basilica, basking in his evanescent glory.  Within hours, all eyes would be turned to France, and the opening of the long-awaited Second Front in the greatest amphibious landing in history.

It is said that when Gen. Clark visited Pope Pius XII, he apologized to the Holy Father for disturbing him with the noise of his tanks.  The Holy Father's smiling reply: "General, any time you come to liberate Rome, you can make as much noise as you like!"
Posted by Anita Moore at 09:16