Use a Banana, Go to Jail

So now this scene, played out in a school cafeteria: 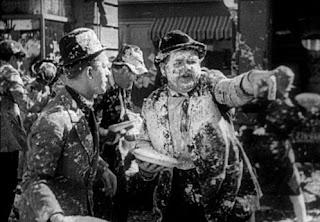 ...is a misdemeanor.  At least it is in Chicago, where good-old-fashioned Chicago political thuggery has evolved into the criminalizing of school disciplinary problems.

On November 5th -- the same day as the terrorist massacre at Fort Hood -- 25 kids at Perspectives Charter School south of Chicago were arrested -- cuffed, transported, booked into detention, charged -- for having a food fight.

I am not a fan of crime and disorder.  But as someone who works full-time in the criminal justice system, I'd like to address some points to the "zero-tolerance" crowd, which is merely a finger on the claw of liberalism, and is not an affliction only in Chicago:

-- The root cause of disorder in society is Godlessness.  The undermining of Church and family, the creeping secularization, political correctness, and tolerance and even encouragement of deviancy in our civil institutions -- which, as liberals, you put there -- has led to our failure to govern our passions.  In fact, political correctness and the mindless drive for "diversity" have led many to believe that they have a positive right to refuse to govern their passions.  We should not wonder at the results.

-- You ignore the costs, usually paid by others, of abandoning the principle of subsidiarity.  Student disciplinary problems are best handled by the schools -- or even better still, in families, which you have worked hard to destroy.  But by involving the police powers of the state, you set all kinds of costly mechanisms in motion: the police; the prosecutors; the public defenders (jailable offenses, however minor, trigger a right to court-appointed counsel); the courts; and the courts' whole constellation of "rehabilitative" machinery, including probation officers and counselors and proprietors of drug and alcohol schools.  In short, you use a Howitzer to kill a flea.

-- But the cost of all this heavy equipment lies not only in the amount of money it takes to run it, but -- what is more important -- in the amount of resources that cannot now be devoted to things that really matter.  The police and prosecutor manpower and time devoted to junior high food fights now cannot be devoted to the pursuit of real criminals.  The courts are jammed with petty affairs that squeeze out the adjudication of major matters.  And -- my personal gripe -- public defenders are forced to waste inordinate amounts of time on relative trifles, to the detriment of clients with really serious and complicated problems.

As bad as federal government corruption is, we cannot afford to go on ignoring the same corruption at the county, city and state levels.  The criminalizing of life's every nitpick is a local-level power grab every bit as cynical and tyrannical as any perpetrated by the feds.  And our failure to govern ourselves gives the power-grabbers their excuse for wiping out our freedom.