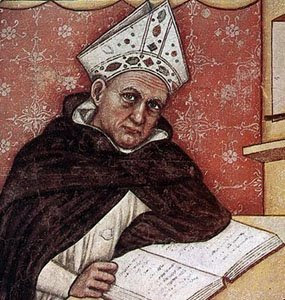 Today is the feast of St. Albertus Magnus (Albert the Great), Dominican priest, bishop, and one of three Dominican Doctors of the Church. Albertus was a man of wide and deep learning, of whom it might perhaps have been truly said that he knew everything there was to know -- at least everything there was to know in his day, from theology to the sciences.

It was Albertus Magnus who recognized the genius of Thomas Aquinas, whose master he was; so devastated was he by the death of his pupil that it is said his tears flowed at every mention of his name. He died on November 15, 1280 in Cologne; was beatified by Pope Gregory XV in 1622; and canonized and declared a Doctor of the Church in 1931 by Pope Pius XI. His patronage includes scientists, medical technicians and schoolchildren.

Dear Scientist and Doctor of the Church, natural science always led you to the higher science of God. Though you had an encyclopedic knowledge, it never made you proud, for you regarded it as a gift of God. Inspire scientists to use their gifts well in studying the wonders of creation, thus bettering the lot of the human race and rendering greater glory to God. Amen.