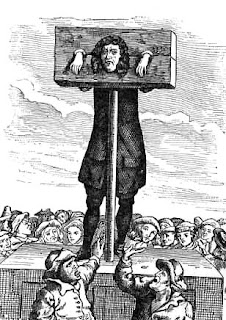 For those of you who would rather eat a bucket of bugs than confess your sins to a priest, consider the story of Rebecca Hancock of Jacksonville, Florida, whose church is threatening to take up the matter of her illicit sex life with the congregation.

Hancock, who has been having sex with a man to whom she is not married, left Grace Community Church because the church "harassed" her over the illicit relationship. Although Hancock is no longer a member of the church, the church has advised her in writing that they are bound to broadcast her sins to the congregation. Citing Matthew 18, the church states that it been left "with no other choice but to carry out the commands of the Lord Jesus Christ" and "tell it to the church." The pastor of Grace Community Church has declined comment, but some other local pastors defend this practice on the grounds that the Bible says to punish persistent sinners.

This story does not state explicitly whether Hancock was sinning secretly or openly and notoriously, though one gets the impression that the authorities at Grace Community Church were threatening to disclose something that was not widely known. But set aside for the moment the fact that Rebecca Hancock's activities are no longer private, now that she has told them to the media. Set aside, too, the fact that she apparently continues in a sexual relationship with a man to whom she is not married, although it might pay the church authorities to ask themselves whether their methods did not serve to make her dig her heels in.

The real question is: is public disclosure of sins, or the threat of such disclosure, really a preferable alternative to sacramental confession? Consider the facts about confession:

1. Confession removes the burden of sins. Provided you have purpose of amendment, you can be certain that when the priest says, "I absolve you of your sins," those sins are gone.

2. Confession gives you the grace to avoid sin in the future. It drags sinful tendencies out by the roots. And most of all, for our present purposes:

Confession was instituted by God. Any other method of dealing with sin was invented by men, and is about as effective as man is himself. Which ain't saying much.
Posted by Anita Moore at 04:40