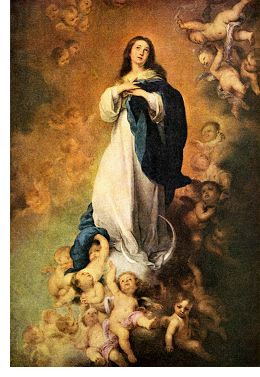 Some of you are willing to accept that Mary needed a great deal of faith in order to carry out her mission as the mother of Jesus. And this is true. She ran the risk of being taken for a woman of loose morals who got pregnant out of wedlock, but she left it to God to inform Joseph of the divine origin of the infant she was carrying. She and Joseph had to run all over Bethlehem looking for lodgings when she was on the point of giving birth. She had to hear holy Simeon tell her that her Child would be a sign of the rise and fall of many in Israel, and that a sword would pierce her own soul. She had to fly into Egypt to save Jesus' life when Herod was out for His blood. She had to endure the agony of losing Him for three days when He was twelve, before finding Him in the temple. She had to meet Him, bruised and torn and bloody, on His way to Calvary, and stand beneath the Cross during His Passion. She had to endure the piercing of His Heart with the lance and His being taken down from the Cross, and the sealing of His Body in the tomb. Mary would have had to have an unbelievable and unparalleled faith in order to endure all of this perfectly, and to resign herself to God's will, no matter how much it pained her, and to depend entirely on God's providence through it all.
Some of you are willing to concede this. Some of you who are willing to concede this are also willing to admit that sin hinders us in the exercise of any virtue, including faith.

You know that God can do anything, and that God never gives us a mission without also giving us what we need to accomplish it. Why, then, can you not believe that, in anticipation of the merits of Christ's Passion, God preserved Mary from the least shadow of sin from the moment of her conception? Plus, it is ludicrous to think that the God who was so particular and demanding on the least details having to do with His temple, and the purity of His priests under the Old Law, and who could and who could not enter the Holy of Holies, would not also have insisted on the utmost purity for the living tabernacle of His Son, namely, the woman who was to carry Him for nine months, and then live with Him for the next 30 years.

Mary's purity is not due to her own merits. The Church has never taught that it is, and no orthodox Catholic believes it. We do believe that Mary never committed the least sin, and it was a special grace from God that made this possible. That is the doctrine that we celebrate today.

Which is, by the way, a holy day of obligation. So: