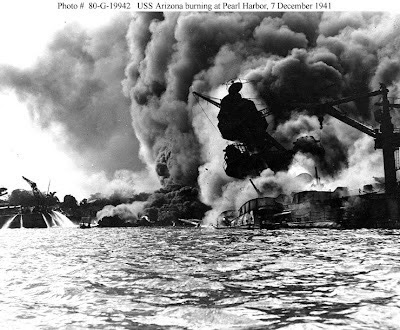 Eighty December 7ths ago, war came to the United States.  The surprise Japanese attack on Pearl Harbor left 2,403 dead, including 68 civilians.  Nearly half of the dead (1,177) perished aboard the U.S.S Arizona, which sank after a bomb struck her forward magazine, setting off a catastrophic explosion.  The next most ill-fated ship was the U.S.S. Oklahoma, where 429 died.  Among the Oklahoma's losses was Fr. Aloysius Schmitt, Lieutenant Junior Grade, who had just celebrated Mass on board ship that morning, and who died helping others escape a compartment that was swiftly filling with water.  Of the other battleships, the West Virginia lost 106; the California 100; the Nevada 60; the Pennsylvania nine; the Tennessee five; and the Maryland four.  Other vessels besides battleships suffered human losses: 64 died in the demilitarized former battleship Utah; 20 died aboard the cruiser Helena; and 19 died aboard the seaplane tender Curtiss.  Amazingly, all the battleships except the Arizona and the Oklahoma were returned to service, even the West Virginia and the California, which had been sunk.
Today the remaining survivors of Pearl Harbor are few.  The Pearl Harbor Survivors Association commemorated its last anniversary ten years ago before officially disbanding, due to the advanced age and infirmity of its remaining members.  Many of them were teenagers when war came -- boys in the morning, men before the day was out.  Now they are centenarians, or nearly so, and soon the date which will live in infamy will pass out of living memory.
Posted by Anita Moore at 21:46