The Mystery of Iniquity 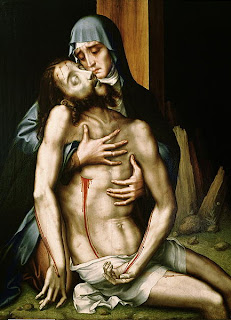 The heart is perverse above all things, and unsearchable, who can know it?
Jeremiah 17:9

God rest the souls of all those who perished today at the hands of the shooter in Newtown, Connecticut.  This post is written at the end of a day filled with speculation and conflicting reports.  At this point, we do not know very much about exactly what happened; we know even less about what motivated the shooter, who apparently ended his rampage by turning the gun on himself.  God alone is that man's judge.

I do not want to add to the speculation and theorizing about what happened.  The focus here, rather, is on what this outrage reveals about our level of spiritual awareness.  Conversations I have had with people about what happened confirms me in my conviction that many of us are suffering from a deadly lack of realism about fallen human nature.  Our society has for many years cultivated spiritual blindness under the guise of enlightened thinking, and it is killing us -- both in this life, and in the life to come.

It is a curious fact that many in the West emerged from the bloody, cruel, murderous, war-torn, irreligious 20th century unable to face up to the fact that there are such things in the world as evil people.  Even in the face of something as horrific as the massacre of 20 little kids and six adults, it is assumed that the shooter must have been insane -- because no sane person could do such a thing.

Nor does this thinking necessarily represent the concern for the murderer's immortal soul that might move one to hope for mitigating factors.  There are, of course, the pure materialists, who think that individuals are nothing more than the sum total of their hormones, and that crime is solely attributable to chemical imbalances in the brain.  But what about those who do not fall into this extreme category, but nevertheless instinctively chalk up atrocities like today's to insanity?  Is it possible that this is just a way of thinking ourselves better than we really are?  After all, the reasoning goes, one must be insane to do something so horrible; I am not insane; therefore, I am incapable of doing something that horrible.  Is this thinking, then, a way of blotting out the reality that every one of us is capable of unspeakable evil -- that there, but for the grace of God, go we?

I do not know whether the shooter in Connecticut will turn out to have been insane.  We may never know.  But what we need to face up to is the fact of original sin, which inclines us to evil and makes it harder to practice virtue.  Only one Man and one woman in history were ever completely free from the taint of original sin, and we are not either of them.  Sin darkens the intellect, and leads to more sin.  We should not be surprised if we find that people who commit terrible crimes are enslaved to some vice, even if the vice seems wholly unrelated to the crime.  It is not unrelated.  Where will our vices lead us, if we do not strive to extricate ourselves from them?

The other thing we need to face up to is that, despite the powerful allure of sin, we human beings who have the use of reason have free will.  That makes us both capable of choosing evil and responsible for having done so.  To hold any other position is to dehumanize criminals and deny their inherent dignity.  It also blinds us to the need to pray for grace to avoid falling into evil ourselves.

Let us pray for the souls of those who died today; for consolation for the families of the dead; and for mercy for him who murdered them.  And let us pray for ourselves, that we may avoid sin, have frequent recourse to the Sacraments, and strive to remain in the state of grace.
Posted by Anita Moore at 20:26