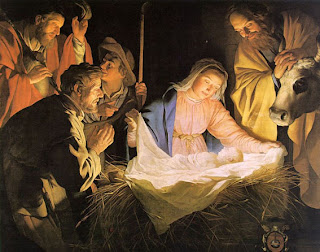 Though coming in the form of man, yet not in every thing is He subject to the laws of man's nature; for while His being born of a woman tells of human nature; virginity becoming capable of childbirth betokens something above man.  Of Him then His mother's burden was light, the birth immaculate, the delivery without pain, the nativity without defilement, neither beginning from wanton desire, nor brought to pass with sorrow.  For as she who by her guilt engrafted death into our nature, was condemned to bring forth in trouble, it was meet that she who brought life into the world should accomplish her delivery with joy.  But through a virgin's purity He makes His passage into mortal life at a time in which the darkness was beginning to fail, and the vast expanse of night to fade away before the exceeding brightness of the light.  For the death of sin had brought an end of wickedness which from henceforth tends to nothing by reason of the presence of the true light which has illuminated the whole world with the rays of the Gospel.

Blessed and venerable art thou, O Virgin Mary: who without loss of purity wert found to be the Mother of our Savior.  Virgin Mother of God, He whom the whole world cannot hold enclosed Himself in thy womb, and became man.
Alleluia, alleluia.  After His birth a Virgin entire thou didst remain: O Mother of God, intercede for us. Alleluia.

The Gradual of the Mass: Salve, Sancta Parens, from the Common of Feasts of the Blessed Virgin in the 1962 Missal
Posted by Anita Moore at 00:00